Uma planta no Minhocão / A weed in São Paulo

A seedling sprouting in the concrete jungle, in the center of São Paulo, heralding a grassroots movement pushing for a life-affirming repurposing of an elevated freeway there. 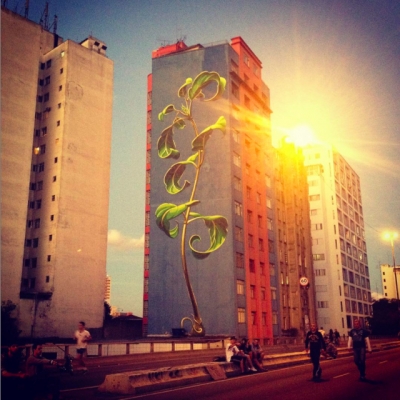 Growing from the roof of a gas station, towering over an elevated freeway, this mural heralds a shift towards new, more human scale ideas for the use of the public space at this location.

A local community has beed furthering the idea of permanently turning over this elevated freeway snaking through the center of the city (nicknamed the Minhocão, “the big worm”) to pedestrians and non-motorized vehicles only, creating a unique, miles-long oasis away from car traffic. 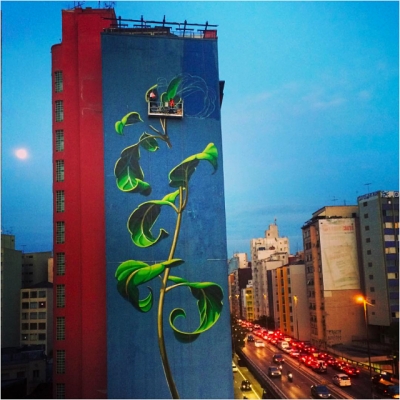 In the midst of intersecting communities of activists, artists, and center-dwellers, striving to reclaim this piece of car-centered urbanism imposed during the dictatorship, is artist and activist Felipe Morozini, who was visual arts curator of the 2015 Virada Cultural (a huge yearly public municipal festival), and who invited me to grow a weed here, among other interventions that resonated with the idea of a Parque Minhocão.

The plant I painted was loosely based on an Achyranthes aspera, a weed that occurs in the area and specifically on the Minhocão, documented by my new friend and comrade-in-poetry, the artist and botanist Laura Lydia. 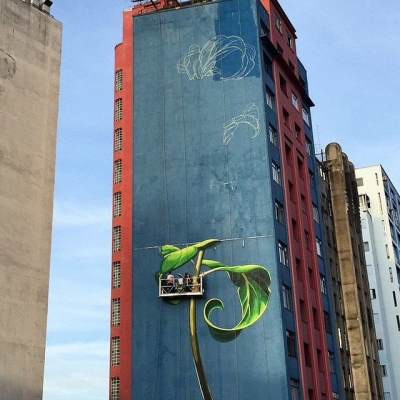 The 13 story tall painted seedling is tapping its water from a real water tank on the roof of the building in front of it.

The disproportion in scale of resource versus life-form might echo the water crisis of São Paulo, and is meant to allude to the remarkable amount of life that is being sustained on dwindling resources, both environmentally, and figuratively within our imaginary as we struggle for alternatives to our current destructive system.

Watch drone footage of the mural in progress in Renata Falzoni's interview with me on Gazeta TV:

Commissioned by
Virada Cultural 2015
of the City of São Paulo ministry of Culture.