Correo – mural at the main post office of Cochabamba, Bolivia.

This corner-wrapping mural at one of the city's busiest intersections, was created by invitation of the BAU 2015 - the Biennial of Urban Art - organized by the local cultural center mARTadero.

I was joined in the painting by my friend Nelson "Gato" Sanchez, artist and graphic designer,  along with several friends who joined along the way, and Magda Rossi of mArtadero held it down organizing it all.

The building is Cochabamba's main branch of the Bolivian national postal services, Ecobol (Empresa de Correos de Bolivia). The mail-carrying bird is a reinterpretation of the Ecobol logo, which used to be depicted on this wall, and which the central authorities in La Paz gave permission to replace with this mural.

The bird is loosely based on the small local bird Chiwanku, and it is dropping letters onto the city, some of them carrying little messages from near and far. Some of them also feature postage stamps portraying a few handpicked personalities. 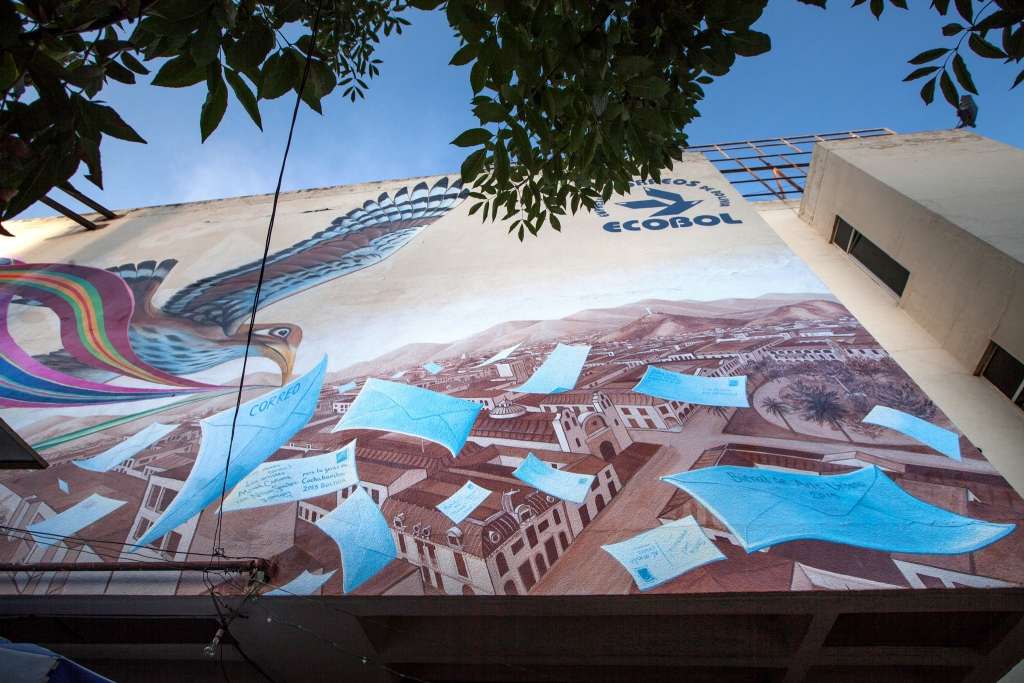 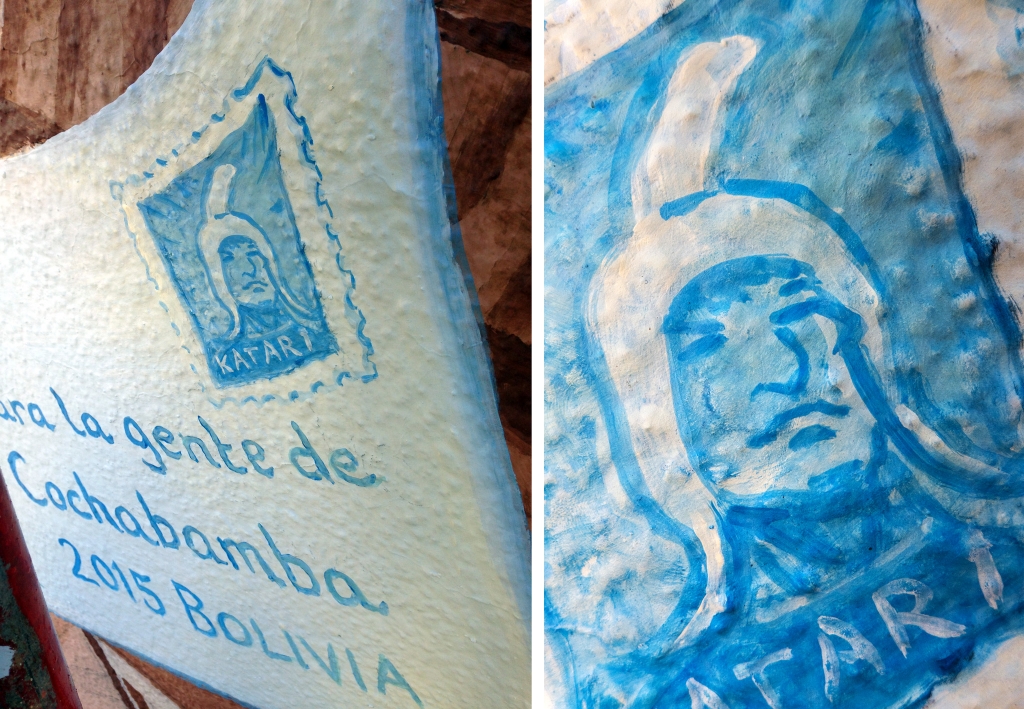 Details in the Cochabamba cityscape include the street life of this corner as I experienced it while painting. The mural itself is represented, along with the vending stations of the many señoras selling stuffed animals, DVD's, packing supplies, food, or offering money-changing services. 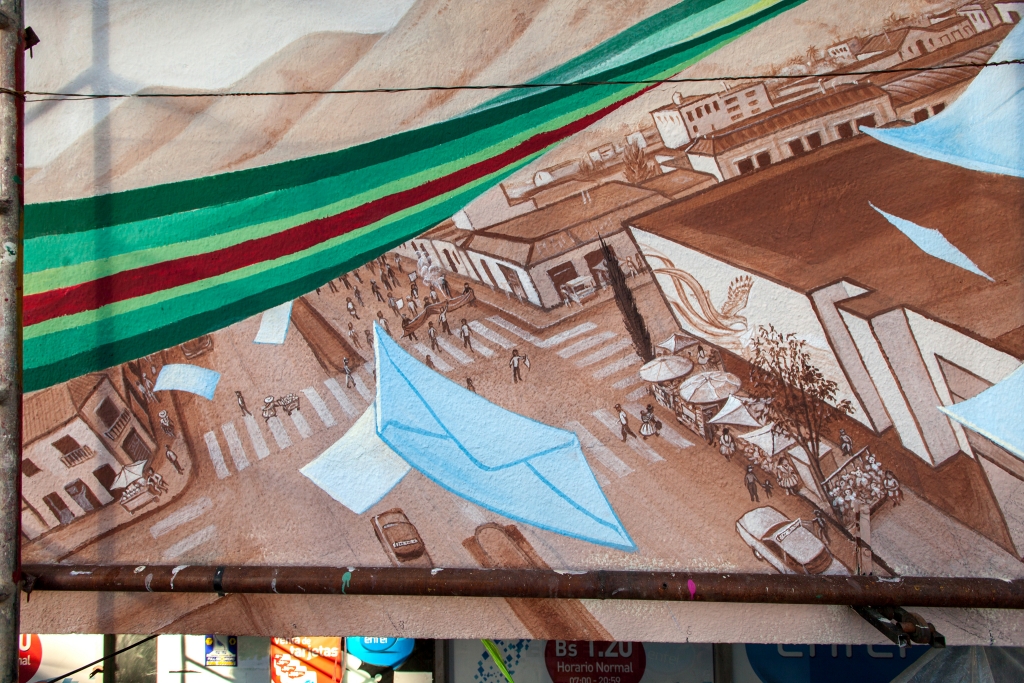 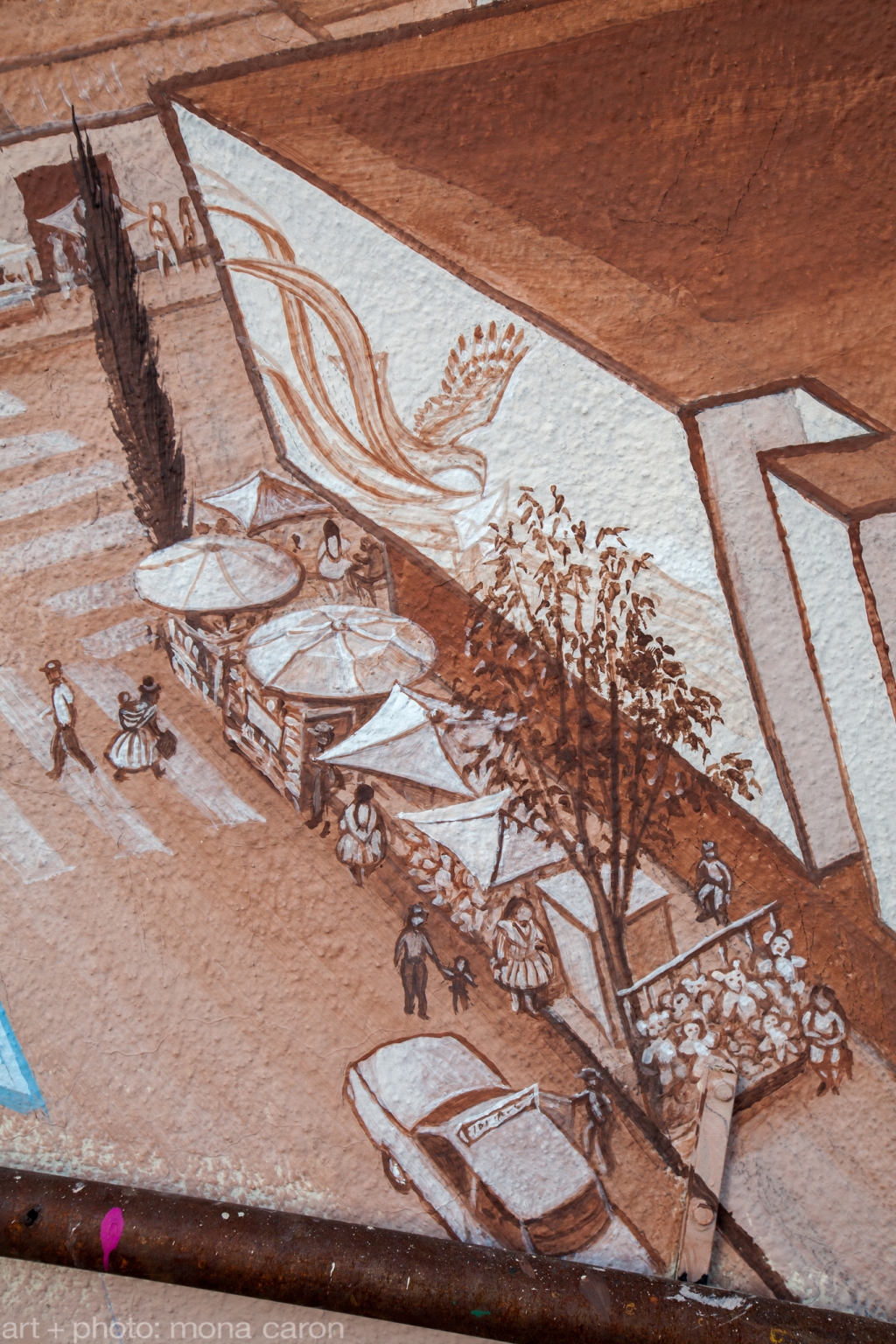 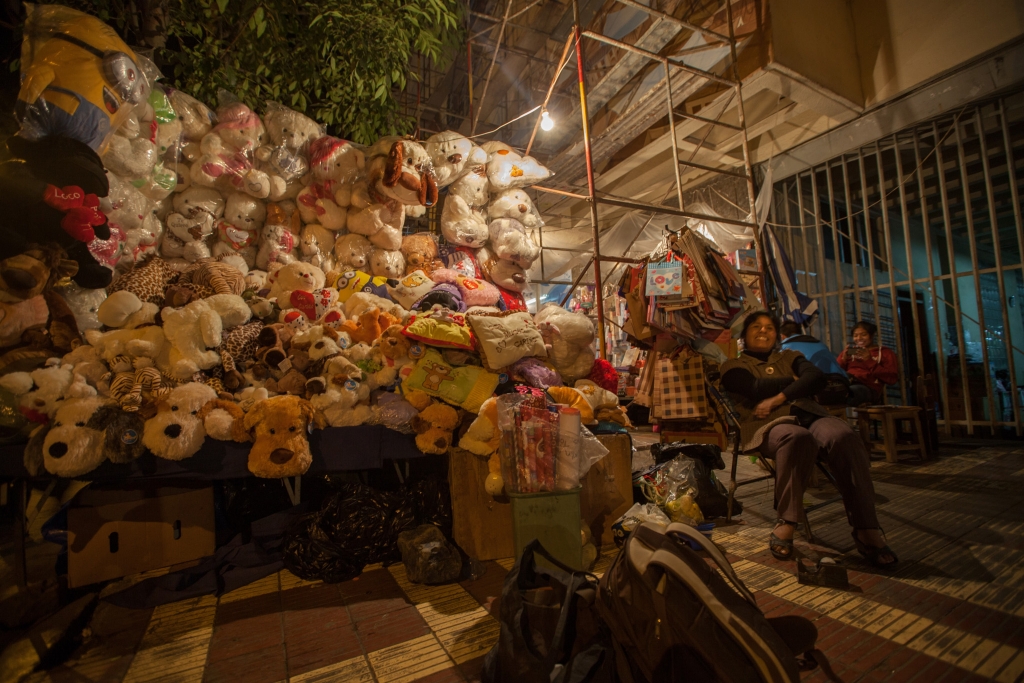 In the street, in the plaza

Among the few details that limited time allowed me to add to the cityscape, I prioritized showing a few examples of what I find to be the most striking characteristic of Cochabamba and Bolivia in general, which is a particularly frequent and intensely active political use of public space.

One example of the direct, face-to-face, and refreshingly Internet-free interface of politics here, are the informal public discussions occurring daily in the central Plaza (around the corner from the mural) with crowds circling up to discuss issues.

In the same Plaza, the daily newspaper gets posted on panels, heavily annotated with handwritten commentary, for people to check out or add to. 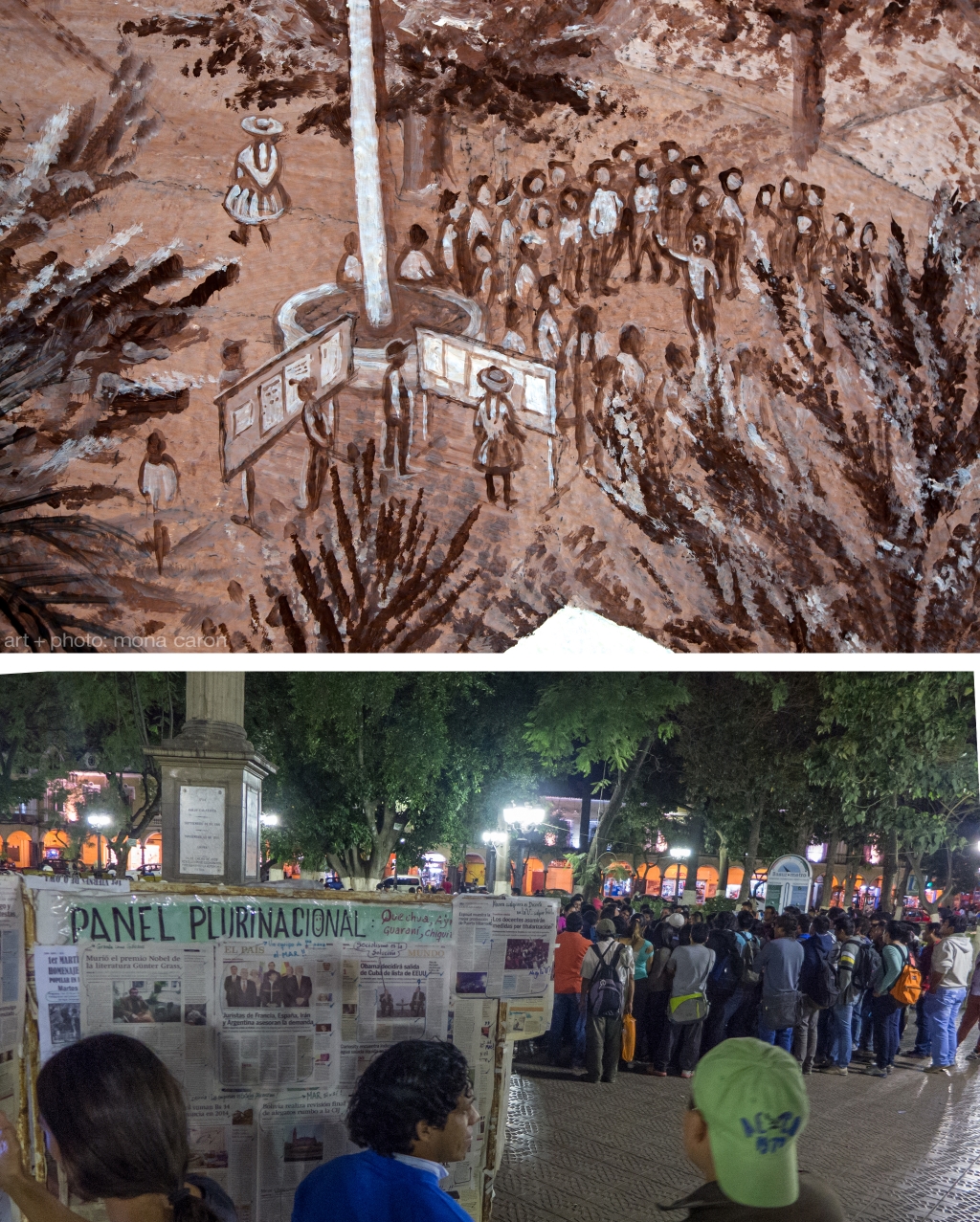 While working at the mural, we experienced almost daily bloqueos (street takeovers by demonstrators). The most frequent conflict during my time there was the students of the UMSS protesting irregularities in faculty hiring process. So that is what I'm showing in the street scene beneath the mural-in-the-mural. 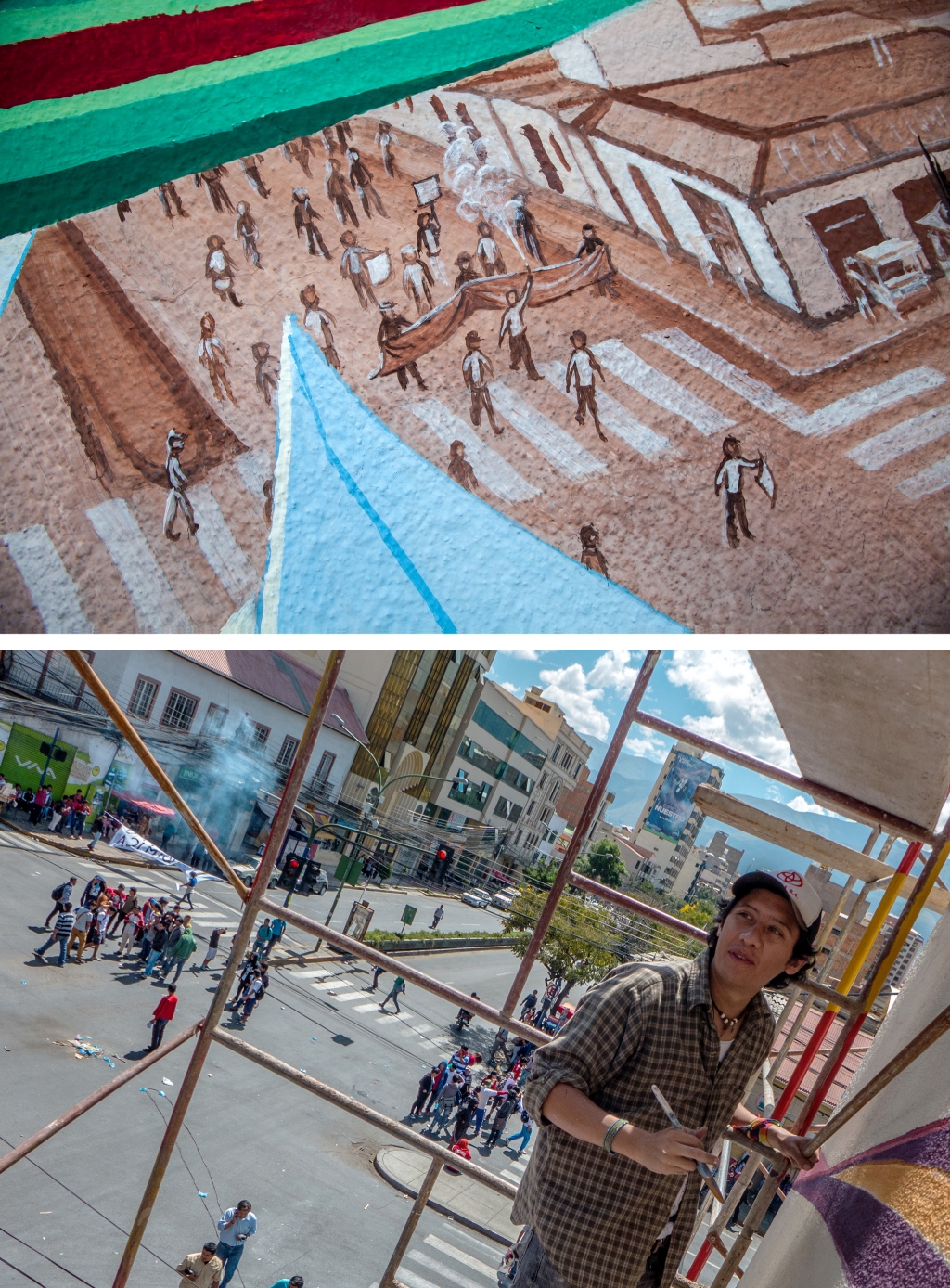 
My main collaborator Gato Nelson Sanchez is a friend who had also lent a hand in my 2010 Water War mural in the same city, which no longer exists. As the most famous and epic local example of the political power of the street, I made the memory of the Water War reappear in a detail of this mural, making a comeback on occasion of the 15th anniversary of the uprising. 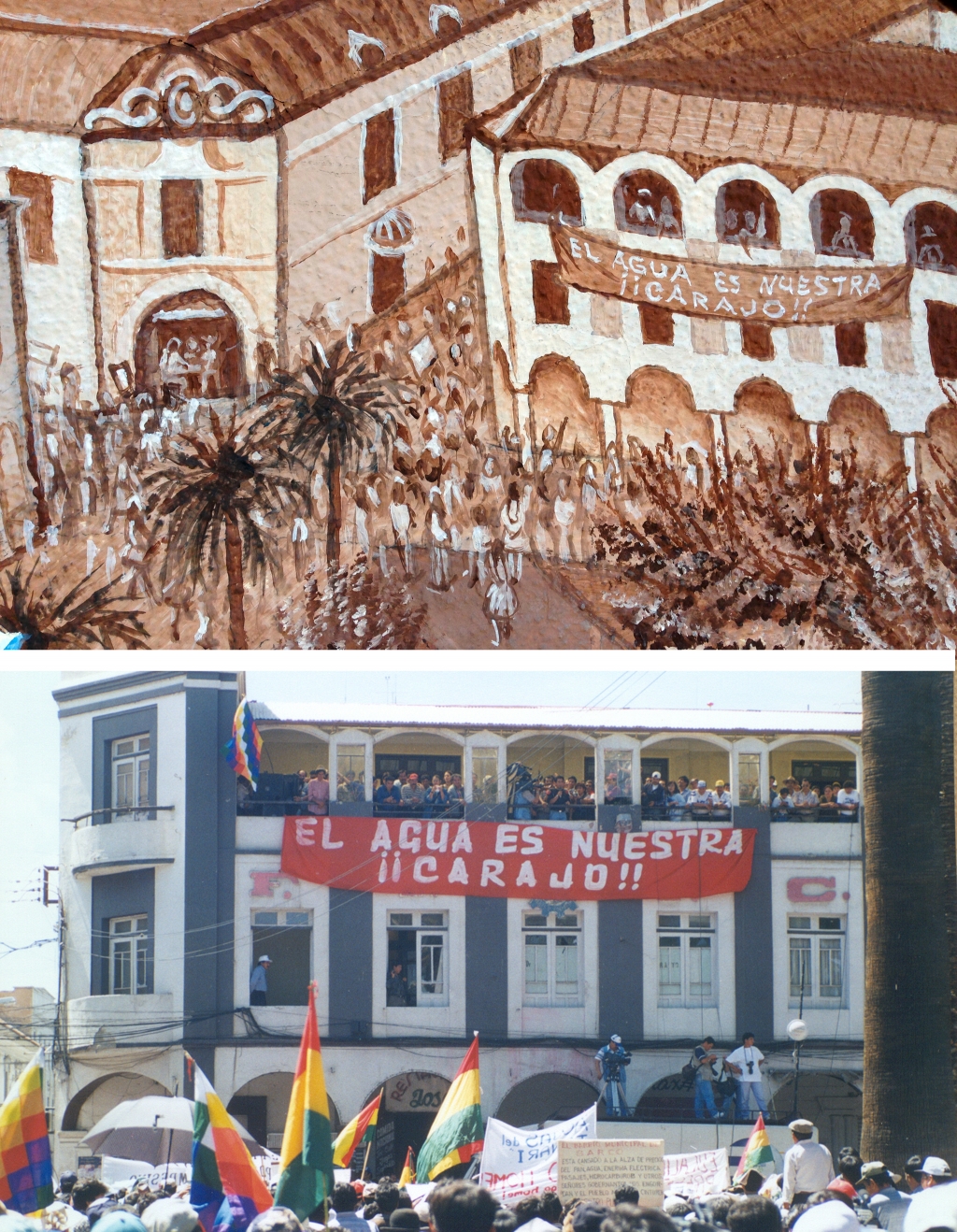 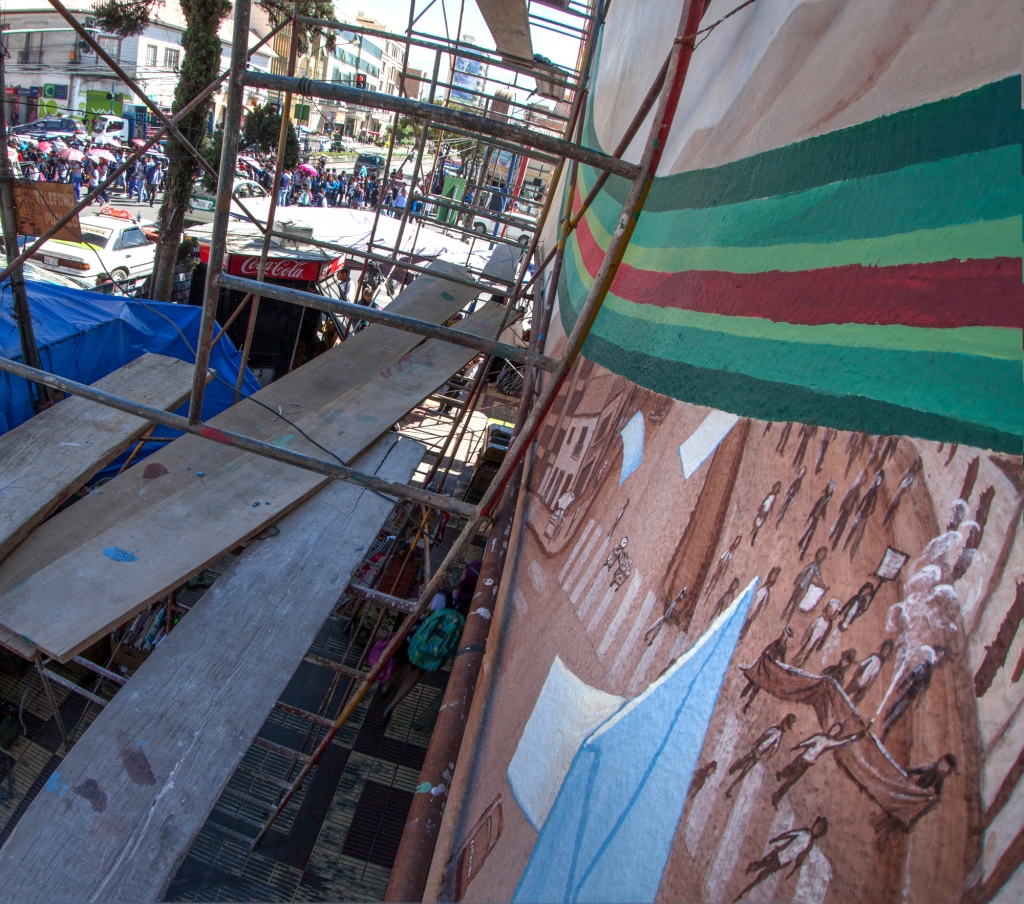 street demonstration inside and outside the mural


(On occasion of the 15th anniversary of the water war, I contributed another small mural, just before I started working on this one. You can see it here.)

The making of the mural

Beneath are a few images of the fantastically lively setting that this mural was created in.

More photos on my FB page: this album shows working in the scaffold;  this other albums shows the mural in the midst of street unrest, as well as a massive 1st of May parade; this one shows more precarious scaffold photos, and in this one we return a ladder to the nuns at the monastery nearby.

Thanks again to Magda Rossi for organizing, and love to Gato, Ingrid, LiQ, Camila, Stefano, Pablo, Lupe, Marcela, Xico, Fernando, Damian, Daniel, and everyone who was present.

Coordinated by Magda Rossi of mARTadero