( mouse over this navigator to pan and zoom )

This mural narrates the history of the small town of Brisbane, California, within a display of the native flora of nearby San Bruno Mountain.

The silhouette of San Bruno Mountain spans the whole background of the mural, and a number of native flowers, many of them butterfly host plants, are depicted in the foreground.

The town of Brisbane is painted nestled within the large, protective shape of a Mission Blue Butterfly, a local endangered species.

A series of smaller pictures within the mural show moments in the history of Brisbane, in chronological order. These are are painted monochromatically in sepia tones.

The outside shape of these images changes gradually from a butterfly to a star. The star is the symbol of the town because of the oversize wooden pentagrams that homes in Brisbane traditionally display on their façâdes, so the butterfly changing to a star symbolizes the transformation of a natural setting into a man-made one.

The star outline continues changing to that a book, which at the end transforms back to a butterfly. This represents hope in education and in our younger generations, as modeled by the work of the local Brisbane Educational Support Team, who spearheaded this mural project.

Inside the little sepia-images: moments of the town's history.

The first historical image depicts the native American Ohlone people. They are eating oysters and looking south across the bay to the shore below San Bruno Mountain, which spans the whole mural's background. 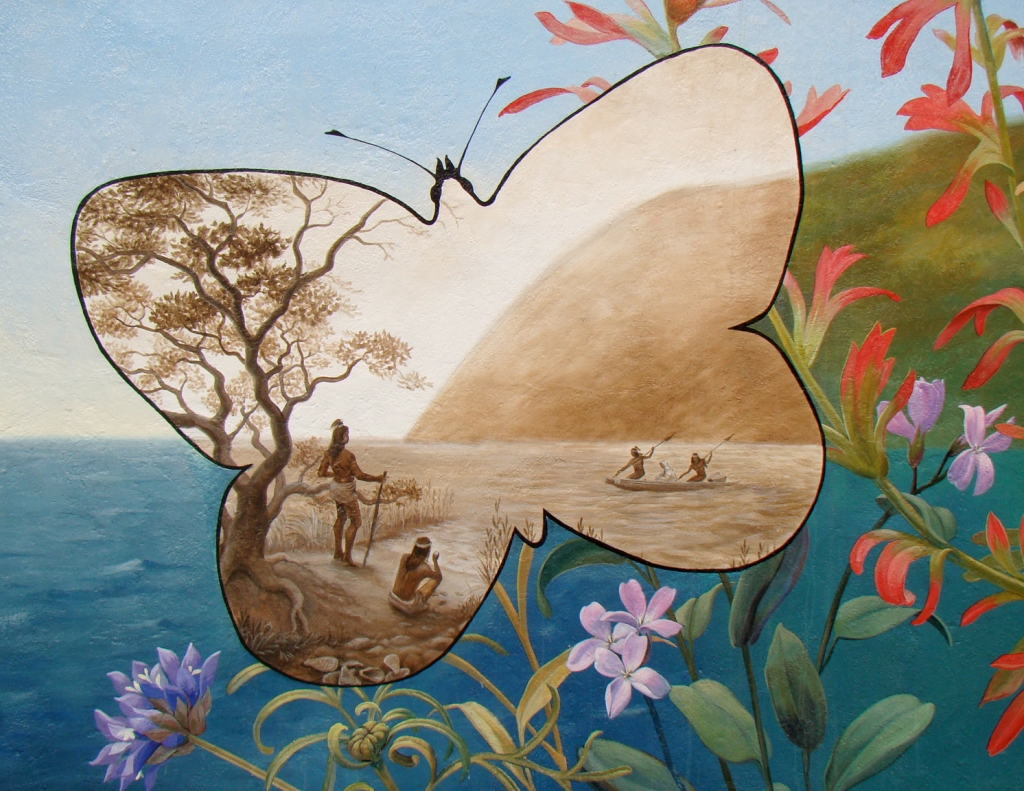 One no longer sees water there, to the west of Sierra Point: landfill has completely eliminated this bay. A shell mound has been found in the vicinity, as well as signs of an Ohlone village, not far uphill. 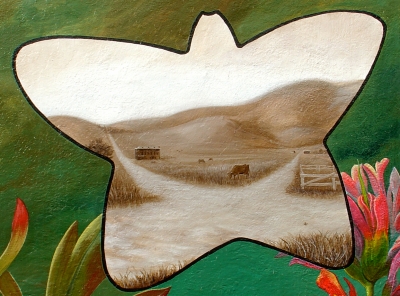 The second vignette is based on a photograph dating 1913, and shows cattle ranches and two roads crossing, which would later become Brisbane's main streets: Visitación Avenue and San Bruno Street. 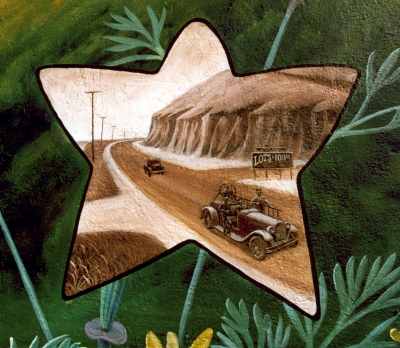 The third image represents the 1930's, when a sign on Bayshore boulevard used to advertise lots for sale in Brisbane for $100.

In the foreground, the first all-volunteer Brisbane Fire Department is shown, along with its first fire engine. 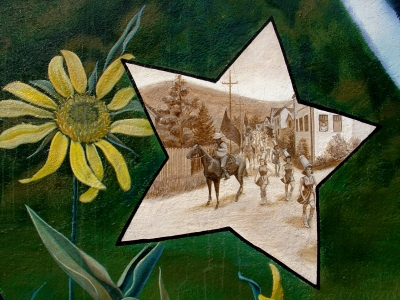 The fourth sepia image is set in the 1950's, and shows the "Western Days" festivities, which used to include a parade with horses and majorettes.

A contemporary view of Brisbane is painted in color in the center of the mural, within the shape of a Mission Blue butterfly, an endangered species native to San Bruno Mountain. 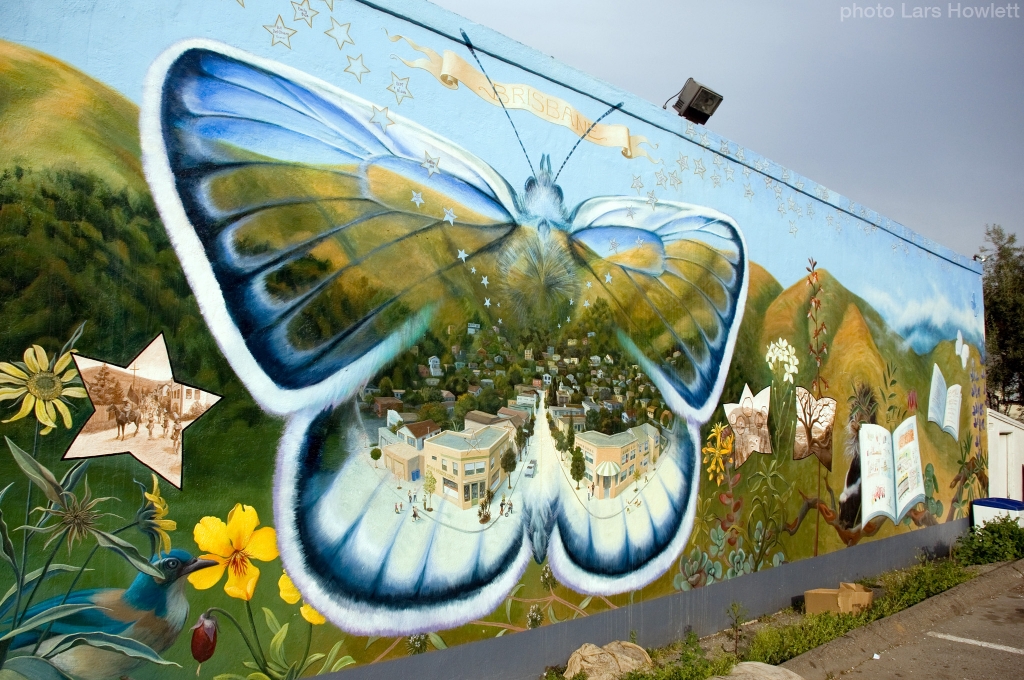 To the right of the butterfly, the fifth sepia vignette shows hands raised in a protective gesture in front of Brisbane and San Bruno Mountain. This represents the activism of the people of Brisbane, and the way they have shaped their community in recent decades. The see-though picket signs show parts of the landscape as it would have looked if the community had not intervened. 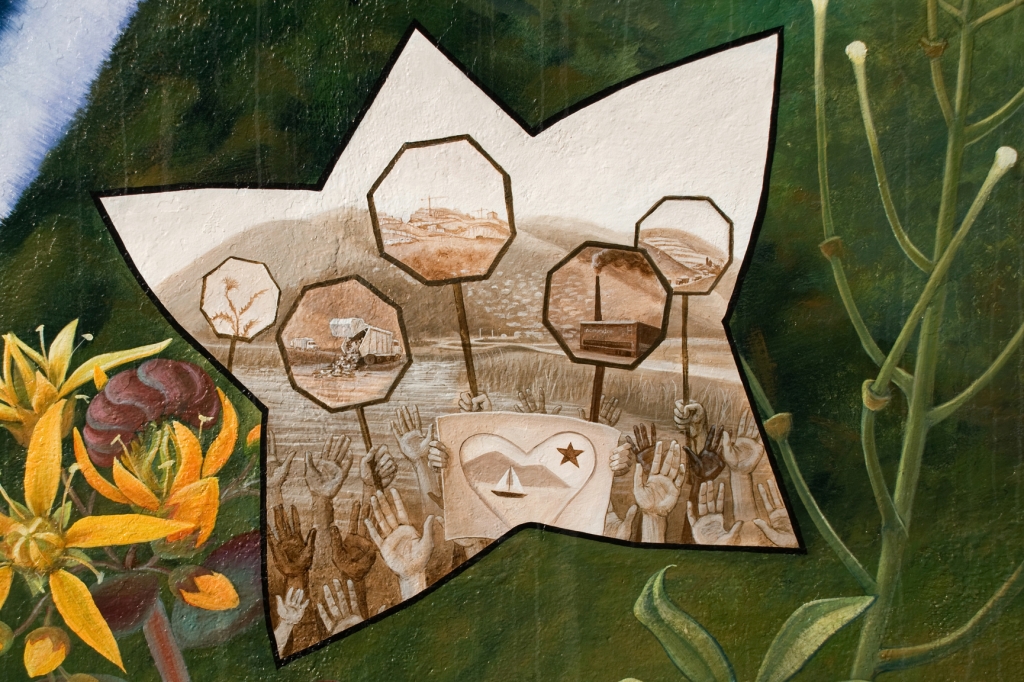 The picket signs are shaped like stop signs, and show several issues that have rallied the local community over the years. 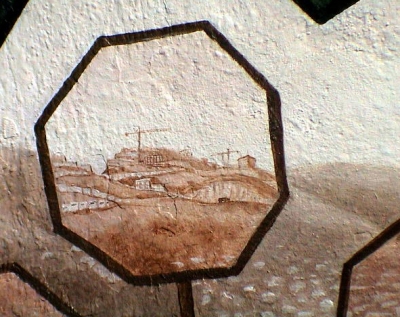 Among these battles were: stopping the landfill in the bay, stopping plans for the leveling and urbanization of San Bruno Mountain, stopping the construction of an incinerator, stopping the truck traffic on Quarry Road and the quarry itself, and stopping the spread of invasive plants.

The sixth vignette shows two amongst many contrasting lifestyles that exist around the edges of Brisbane: In the far background, the newest housing development on the Eastern Ridge (which was built on the sensitive habitat of several rare endemic species) offers a life with all amenities. 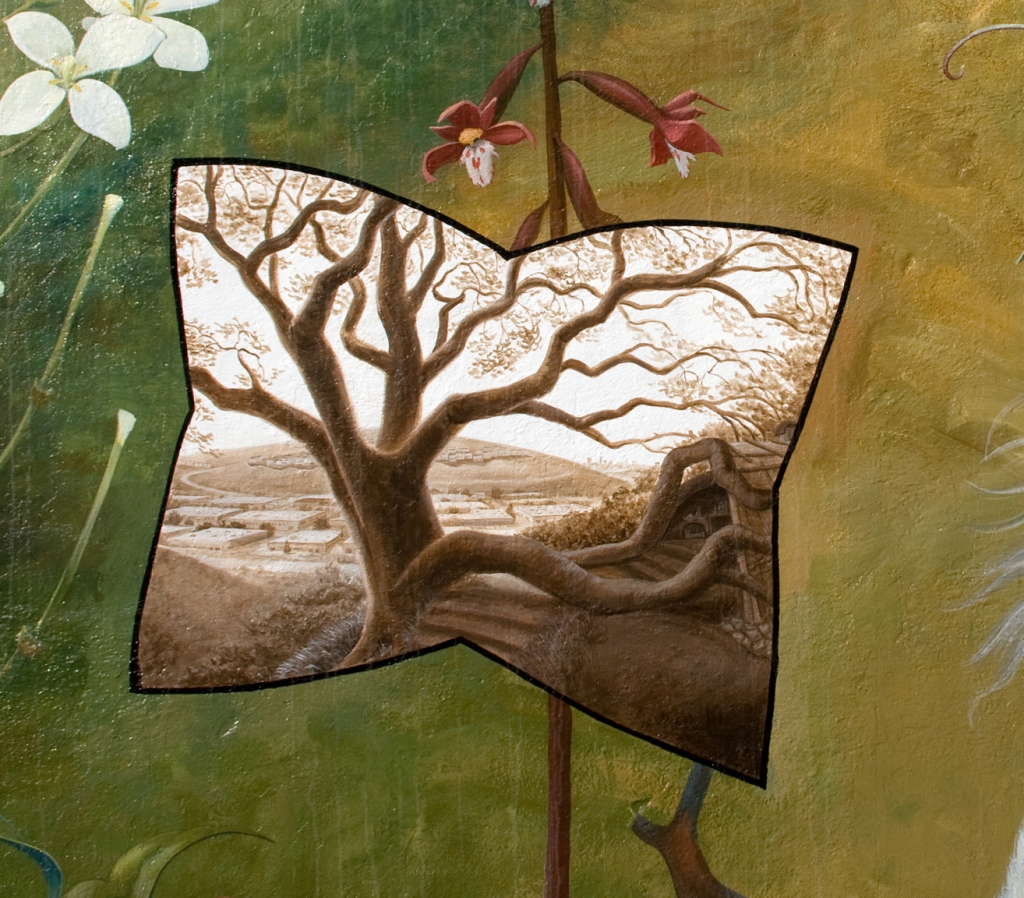 The Ridge in the distance, and Besh &amp; Thelma's tree dwelling in the foreground to the right


By contrast, in the foreground, the remarkable hand-made tree dwelling of local mountain hermits Besh and Thelma in Owl Canyon represents a very frugal but truly unique way of life.

The couple lived on the mountain for 12 years, but at the time this mural was being painted, their hobbit-like dwelling, was being threatened by county authorities, citing a law that prohibits living on the mountain. They were ultimately chased off and their home was destroyed in late 2002.

Lastly, at the right end of the mural, the painted book contains artwork by 15 local children, whom I asked to imagine and draw a future Brisbane.

The book then flutters away becoming a Mission Blue butterfly. 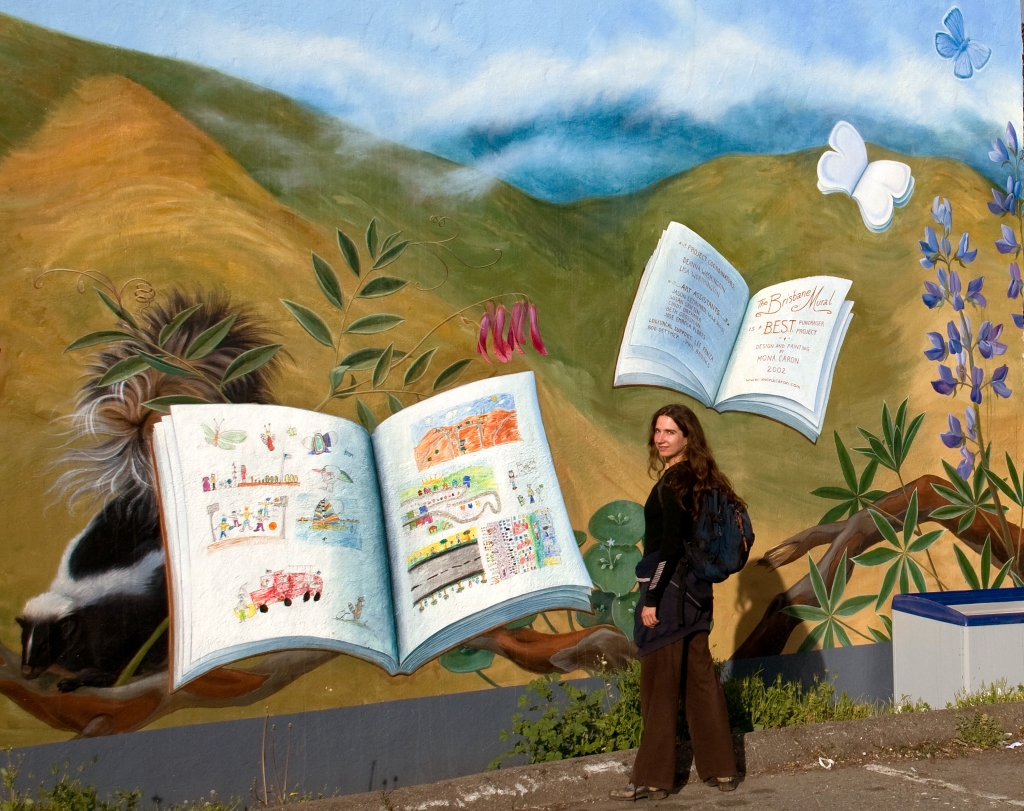 Commissioned by Brisbane Educational Support Team (BEST), as a fundraiser for local schools.

Special thanks for spearheading this project to Dianne Washington, Lisa Worthington, and BEST.