(mouse over this navigator to pan and zoom)

The mural celebrates the creation of the adjacent Duboce Bikeway, by illustrating the importance of that little stretch of street to bicycle traffic in San Francisco.

The Duboce Bikeway is the gateway to the Wiggle: a zig-zagging route through the Lower Haight that enables bicyclists to avoid steep hills when heading from East to West in San Francisco. So the mural shows a virtual ride across the whole city from East to West, from downtown to Ocean Beach, passing through the Wiggle.

At the center of the mural, this very bikeway is shown (along with the mural itself), and the path enters the Wiggle, which is represented by a wiggling waterway leading to the Haight. This symbolizes how, as we instinctively avoid unnecessary effort when heading uphill, we end up retracing the natural flow of water. And, indeed, an actual creek used to run down the canyon that the Wiggle follows.


The names of the streets in the Lower Haight that make up the Wiggle are hidden in the water of the creek. From the there, the path continues through the Panhandle Park in the Haight, then Golden Gate Park, and finally the beach, ending in movie-like fashion: riding into the sunset.

Back at the beginning of the mural, at the left end of the picture, we see a bit of the context that surrounded the mural at the time it was created.

The painting begins with a view of downtown, flooded with cars in a tremendous gridlock. At the foot of Market Street, a stream of Critical Mass bicyclists is seen leaving Justin Hermann Plaza. 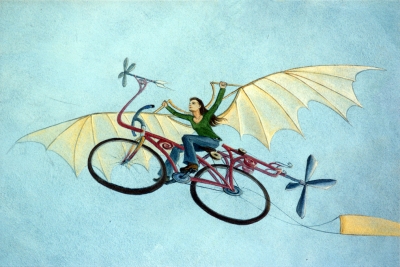 Some of these bicyclists take flight in Leonardo-like, fanciful pedal-powered flying machines. They glide up into the sky, each trailing a long, fluttering golden banner.

These characters symbolize the dreamers and utopians who, each in their own unique way, hold aloft the banner of their dreams and ideals for a better life that overcomes the unsustainable mess beneath.

Such dreamers are often frowned upon by those who profit from the status quo, a fact that is represented by the scowling expressions on the corporate office buildings, which were added by guest artist Jim Swanson, a noted illustrator among the pioneers of the SF bicycle movement.

To the right of this scene, the whole rest of the mural unfurls as another one of these golden banners, which is meant to express that, what follows, is but one of many constituent dreams for a better world: in this case, the dream of a bike-friendly city where human-powered and public transportation define the streets.

The Duboce Bikeway was the very first stretch of street in SF to be converted from car use to bicycle- and pedestrian-only use, and The City Bike Plan commissioned this mural to accompany this first bikeway. The San Francisco Bicycle Coalition fiscally sponsored the project.

The Duboce Bikeway mural was Mona's first Mural, created during a period, the late nineties, of great transformation and activity within fast-growing bicyclist community of San Francisco. 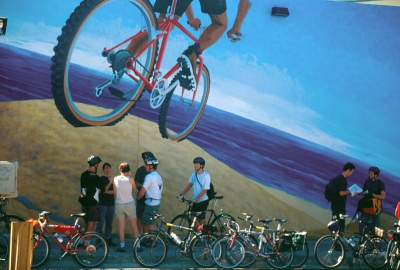 The Critical Mass movement was at the height of its politicization and overt activism, and had galvanized a widespread public discussion of alternative uses of public space, adding to an already widespread critique of car-oriented urban infrastructure.

The membership of the San Francisco Bicycle Coalition was skyrocketing at the time, and the flourishing of a new bike-culture had just begun.

Progressive city planning was aided by this political climate, and decisive infrastructure improvements started to be implemented. San Francisco would never be the same: the bike-friendly City we know today bears little resemblance, for bicyclists, to the dangerous, car-centered place it used to be up until the late 90's.

The project manager, Joel Pomerantz, has been active with the San Francisco Bicycle Coalition since its founding in 1991. For fifteen years, Joel has worked as a project manager, resource guide developer and consultant to nonprofit organizations. In 1996 he volunteered to coordinate the mural project, based on his past work with murals, and with the bicycling constituency of this project.

Joel sells sets of seven 4.25 inch by 12 inch postcards of the mural, which if placed side by side make one 7 foot long complete picture of it.

Listen to a podcast"interview and tour of the mural with Mona, in conversation with Jon Winston of Bikescape". You can also download it from iTunes, and use it as an audioguide as you stroll by the mural.

About the mural's sheercoating: Graffiti, Varnish and Wall Chemistry by Joel Pomerantz