This is the West side of a mural diptych at the site of a San Francisco farmers market. This side features contemporary views of two different parts of 24th Street, comparing the Noe Valley neighborhood with the adjacent Mission district.

The giant vegetables tie in to the farmers market that takes place in front of the murals on Saturdays. There's a big broccoli on the left, and a diverse array of root vegetables being uprooted where the Mission District is depicted.

On the left side of the ribbon containing the cityscape, above the fold, you can see the Noe Valley neighborhood as it appeared when I was working there. It is actually the view of what's directly across the street from the mural. On the right side, you can see the Mission District.

24th Street in San Francisco, with Noe Valley and the Mission District. - interactive image: click to zoom in!

Above the fold - Noe Valley

A corner of this mural itself is visible near the left end of the banner, with the owner of the mural building on a ladder, working on the sign of the venerable Haystack Pizza restaurant there, run by a Greek family since the 70's.

A few neighbors are seen enjoying lattes at the local coffee shop. Overall it's a mellow, sheltered scene with nothing out of the ordinary going on. This is what this part of 24th Street in San Francisco feels like.

Below the fold: the Mission District

On the same 24th Street, down the hill, at a mere four block's distance, the scene is quite different. Below the fold, the texture of street life is much deeper in complexity, as the painting shows where 24th Street meets Mission Street. 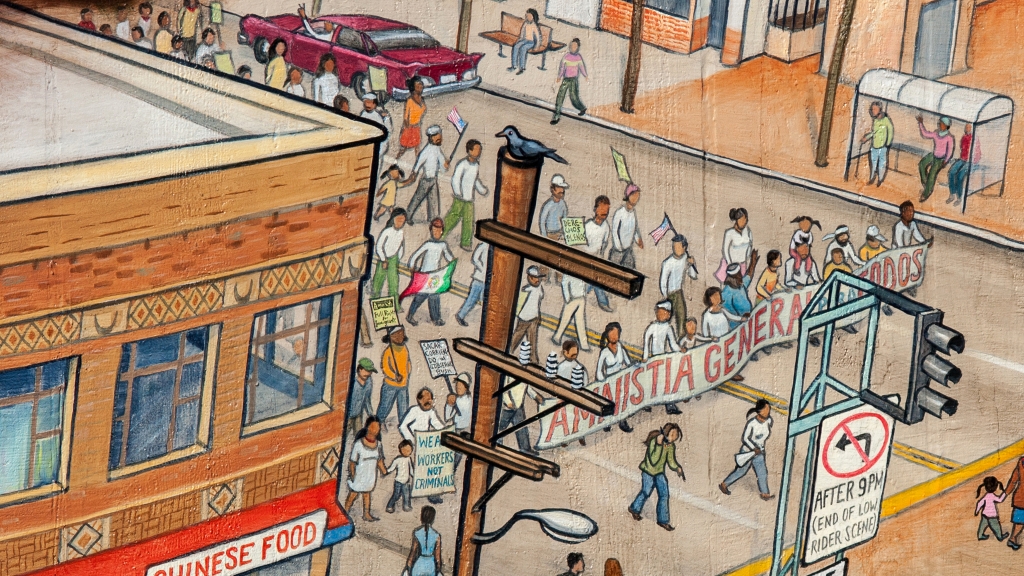 There, in the Mission, the mural shows various kinds of real-life events one could regularly run into there at the time: from street performance (like Keith Hennessy in a wedding dress ranting on the fire escape of Dance Mission Theater), to street demonstration (here the people dressed in white for the big marches for immigrants' rights of 2005), to street art being done, to regular street life that includes working class families of many origins. 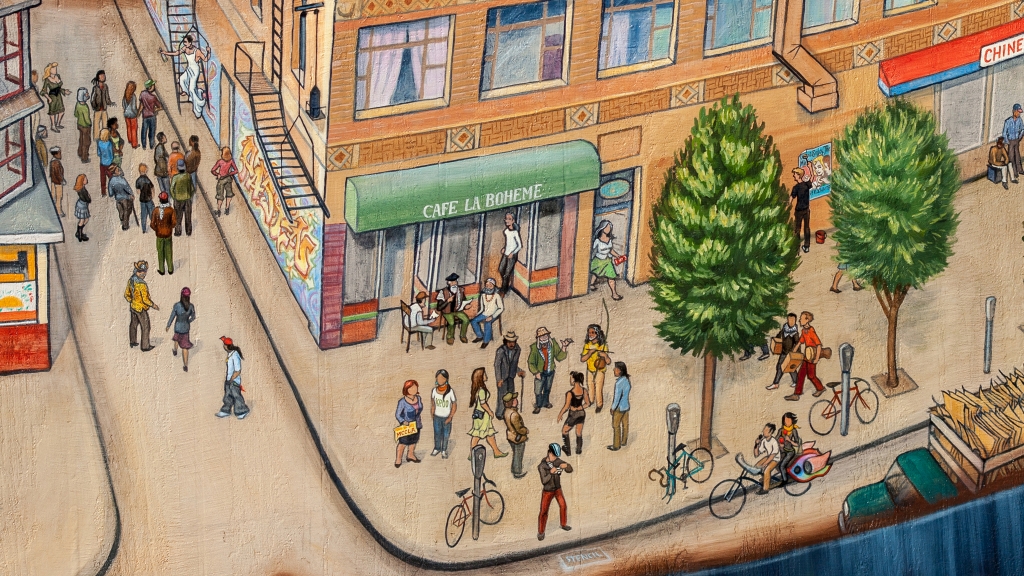 The urban fabric is richer on that lower part of 24th street (or it was at the time), and I painted it into this safe, clean, more homogeneous and perhaps a little insular neighborhood as a reminder of what lies just down the street from there: a place more urban, where a wider range of human experiences unfold and can be witnessed in an unmediated way.

There are clusters of notable local activists, writers, and culture-makers depicted in the mural. Among which:

The scene near La Bohème: the ubiquitous truck of cartoñeros, homies passing the bohemian freaks in the alley, gathering around Keith Hennessy, Guillermo Gomez-Peña looking back.

There's postering being done by the Mission Print Collective, latin American musicians with their cajones (artist-musician Daniel Diaz-Tai and Raul Vargas of Makrú).

Closer to Mission street, there are other artists representing various genres. From the Red Poppy Art House represented by founder and artist Todd Brown and singer Meklit Hadero, crossing the street next to Susan Cervantes of Precita Eyes.

Rapper and activist Boots Riley of Oakland's The Coup is seen visiting the Mission with friend Marci Bravo, nearby are neighborhood chronicler and historian Adriana Camarena, with fine artist Paz De La Calzada, near bicycle activist and SFBC co-founder Dave Snyder, Myself and Nick Kasimatis watching the demonstration, where activist Miguel Robles is on his cell phone.

Towards the rear of BART plaza, Past the Jesus preachers and their PA systems and the people waiting for MUNI, I took artistic license to move the trees to the side to reveal the faded and once controversial Bart mural, which depicts the pillars of the railway system morphing into heavily burdened workers. I hear BART wasn't crazy about it and planted trees in front of it on purpose.

This urban texture was destined to change, and long before the gentrification of San Francisco reached its peak, the writing was on the wall. Not by chance did I place the Mission District side the banner in front of a diverse group of root vegetables being uprooted.