Puppet show within the mural, at the unveiling of the Noe Valley murals

For the unveiling of the Noe Valley murals, we created a puppet show about food politics and industrial agriculture, to tie in and support the endeavors of the independent organic farmer's market that takes place in the lot between the two murals.

Activists David Solnit, Tom Cohen and I made puppets of vegetables out of recycled cardboard, and painted a scrolling backdrop which we installed within the window in the middle of the eastern mural wall. 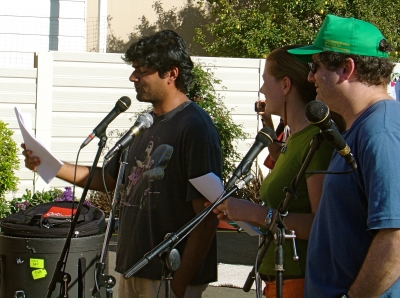 </span><span style="font-size
The voices for the puppets were provided by activist-comedian Larry Bogad, food sovereignty activist and author Raj Patel ("Stuffed and Starved - The Hidden Battle for the World Food System"), Levana Saxton, and other activists in the field.

The play ended with an audience-participatory epic battle between an army of GMO corn and the organic corn of the Clandestine Insurrectional Vegetable Movement, and a subsequent march in the streets ensued. 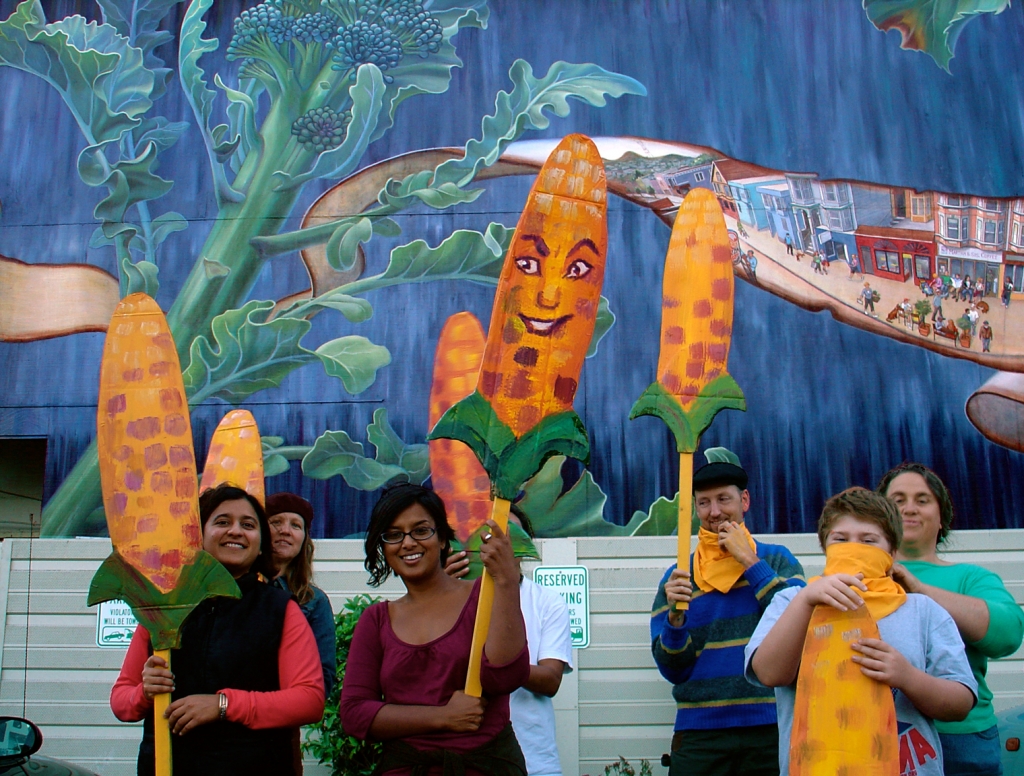 Before and after the puppet show, for the afternoon-long unveiling celebration, Rupa and The April Fishes, Mark Growden, Jeffrey Alphonsus Mooney and DJ Felina provided a rousing soundtrack.

people on rugs and cushions
covering the asphalt

As a way of echoing some of the utopian themes represented in the mural,  friends and neighbors organized a clothing swap, some of the organic farmer's market stalls, and the parking lot was transformed into a living room with rugs, pillows, potted plants, couches, and chairs for people to lounge in.

Several speakers including "nowtopian" local author, historian and activist Chris Carlsson, and poet Zack Rogow shared thoughts, and to our surprise, a remarkable proclamation from San Francisco Mayor Gavin Newsom was presented at the event...