Windows Into the Tenderloin

Windows into the Tenderloin is a mural in, for, and about the Tenderloin District in San Francisco. The mural has several "windows" that show bird's eye views of the neighborhood, each with intricate descriptions of the street scene there, with references to history, local legends, and a collaboratively envisioned future dreamscape of the community.

Countless details in this mural were painted in real-time response to spontaneous interactions with the local population. Among other things, they include just under 300 mini-portraits of real people of the neighborhood: not civic notables or famous heroes, but anyone there who wanted to be a part of it.

This mural is therefore a time-capsule documenting this neighborhood’s street life during a time that narrowly preceded a period of accelerated change in this City.

Due to the miniature scale of the detail, I invite you to take a closer look within these “chapters”:

The mural was painted in the asian reading direction, from right to left, and its general narrative roughly follows this "inverse" direction.

How the project came to be:

The mural was spearheaded by the North of Market/Tenderloin Community Benefit District, who invited Mona to create a public mural at this location.

The mural process began in late 2008 with research through community meetings and neighborhood walks led by residents and local organizations.

The painting started in 2009, with a design based on this research, but its essence emerged by remaining permeable to spontaneous input throughout its year-long making.

The mural was dedicated in March 2010, many months later than expected, due to the unusual intensity of the social interaction that shaped the mural, some of which was featured in an Emmy-winning short KQED documentary by Paige Bierma. 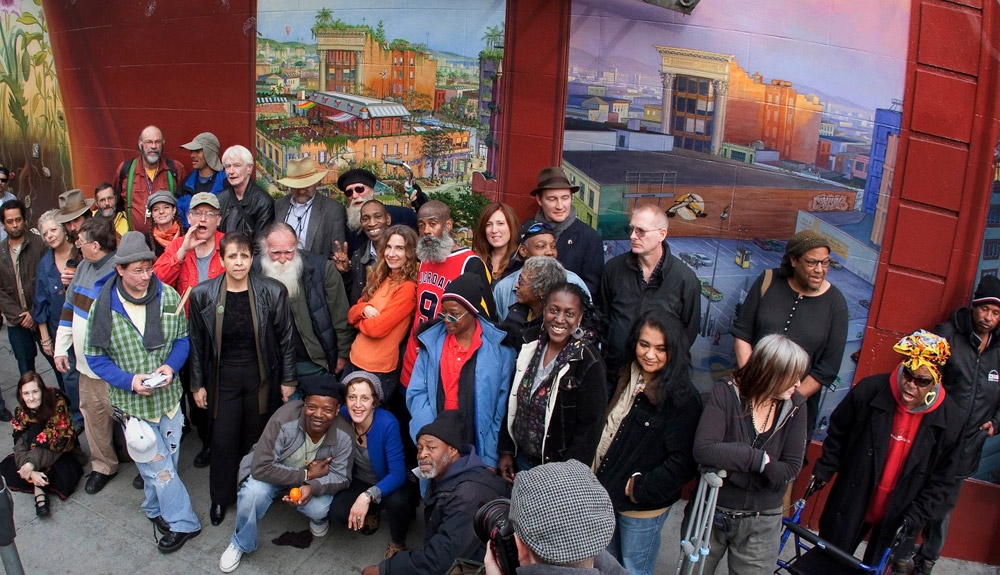