Windows Into the Tenderloin - The Ghosts Of The Past

From the cityscapes below, vapor-like white streams rise up into the sky. These are the trails of transparent "ghosts of the past.” Each is a building or a symbol of something that used to exist at the precise location it is drifting from.

The bits of history represented by these ghosts were picked from the knowledge that several neighborhood residents with a passion for local history shared with us, and who took me and project manager Lisaruth Elliott on neighborhood walking tours. Among them were the excellent local tour guide Peter Field,  photographer-historian Mark Ellinger, Lauren Alden, and the initiator of the mural project, Elaine Zamora. 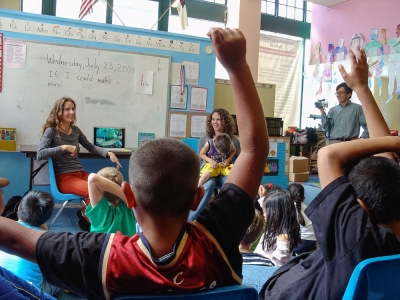 pop-up slideshow: research & explorations
We also got to familiarize ourselves with some of the neighborhood’s establishments and organizations through visits with the most disparate people and places: from kids’ programs, to local sex clubs, to the Franciscan monastery, to the YMCA, to the police station; from SRO hotels to high-end apartment complexes; from the top of Hastings tower to a cellar housing a local theater company... To the right, you can pop up a slideshow of some of these explorations.

As with all my murals in San Francisco, the local participatory wiki project FoundSF was also a valuable resource for historical research.

The night scene on Jones

This night scene shows the nearby intersection of Hyde and Turk Streets. A saxophone player in the parking lot is conjuring up the spirit of the legendary Black Hawk jazz club which used to be there.

Across the street in the blue building is Hyde Street Studios, an analog music recording studio with a venerable history, and the ghosts of the vinyl records of its famous hits of the 60‘s and 70’s ascend into the sky. 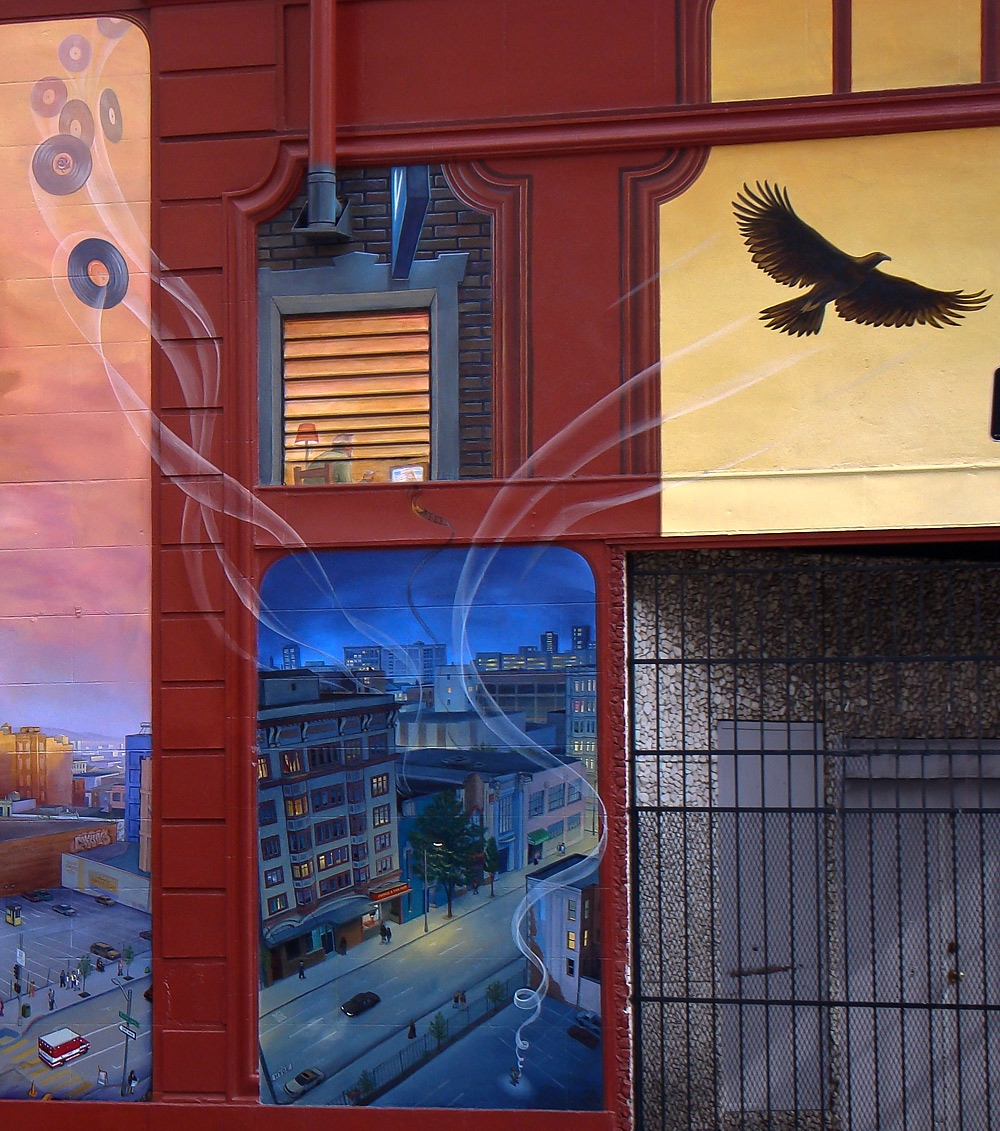 Other ghosts in this panel symbolize the bygone local film and cinema industry. The art-deco row of buildings on the west side of Hyde used to be film exchanges, and the theater worker's union. The ghostly film strip originating there burns up right below the TV set in the SRO window above, as the advent of TV marked the end of that period. 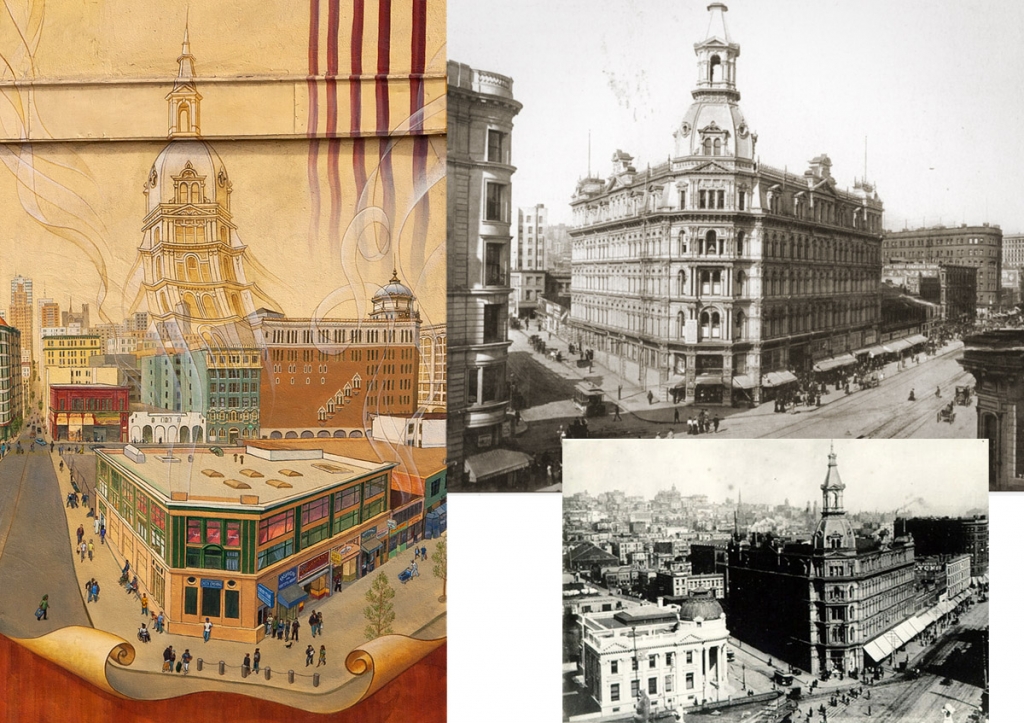 The ghost rising from the corner of Market and Jones used to be the Murphy building, housing Prager's department store until 1906. 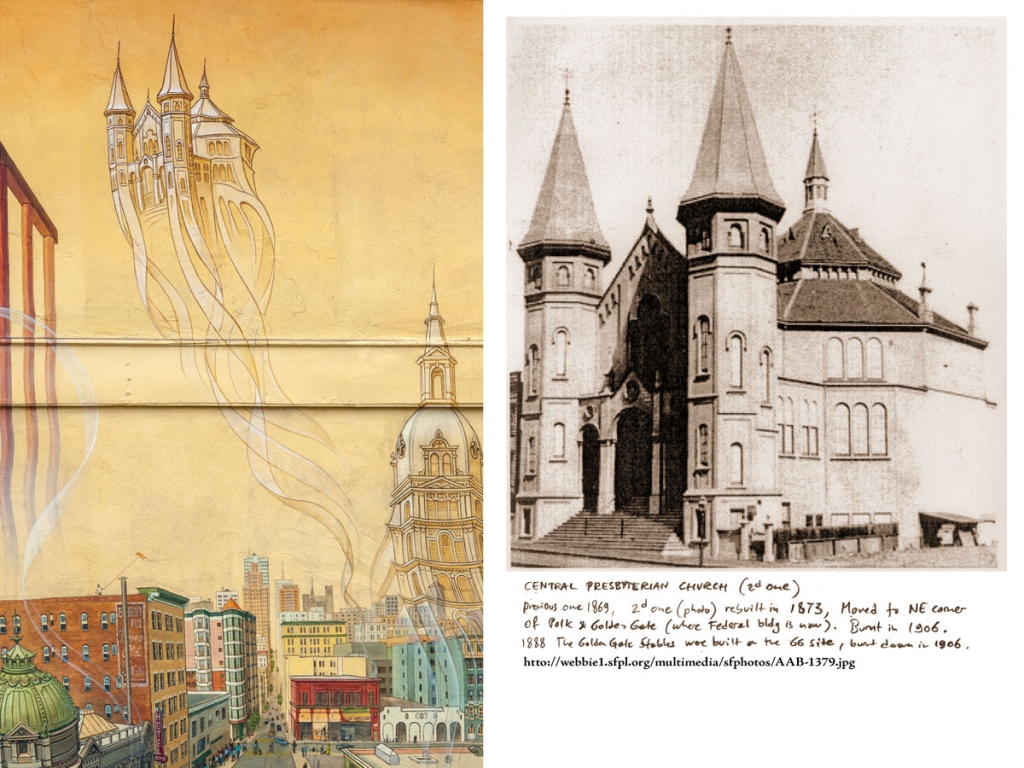 the Central Presbyterian Tabernacle used to stand where the parking garage on Golden Gate avenue is now, right next to the mural. 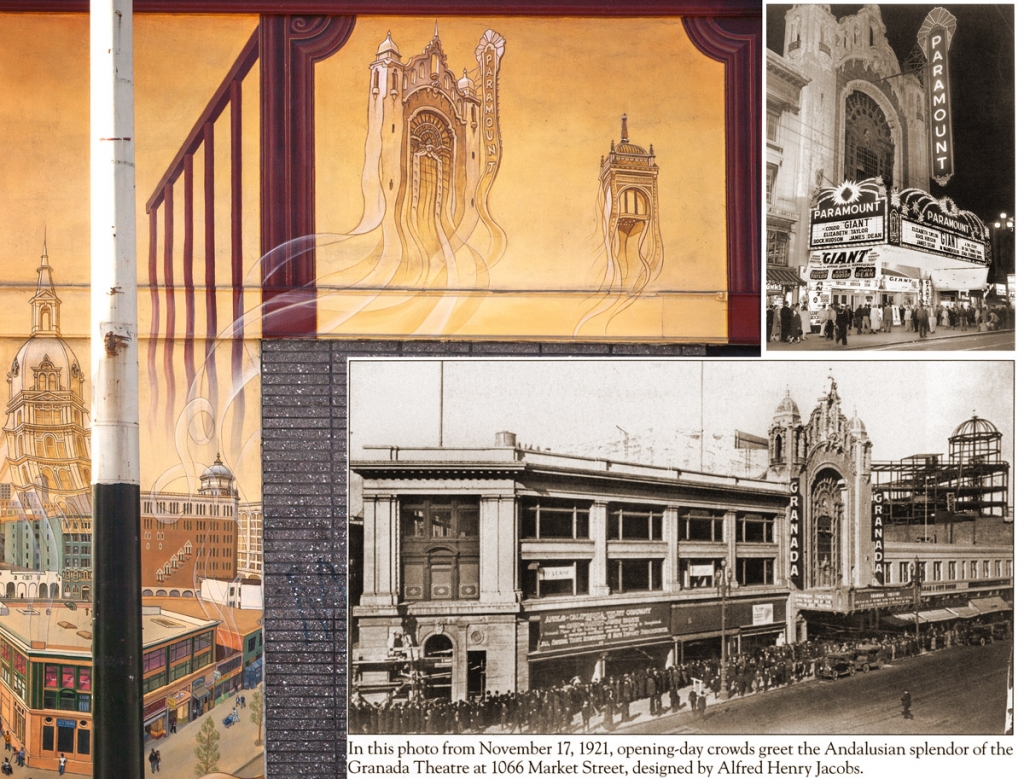 The Granada theater, later renamed Paramount, was a spectacular art-deco cinema which used to stand directly across the street from the mural. It was torn down in 1965, and replaced with a parking lot.

The baldachin dome of the Empress theater, painted next to the Paramount, was dismantled, but the rest of the building still existed on Market St at the time of this painting, albeit stripped of its old decorative elements. 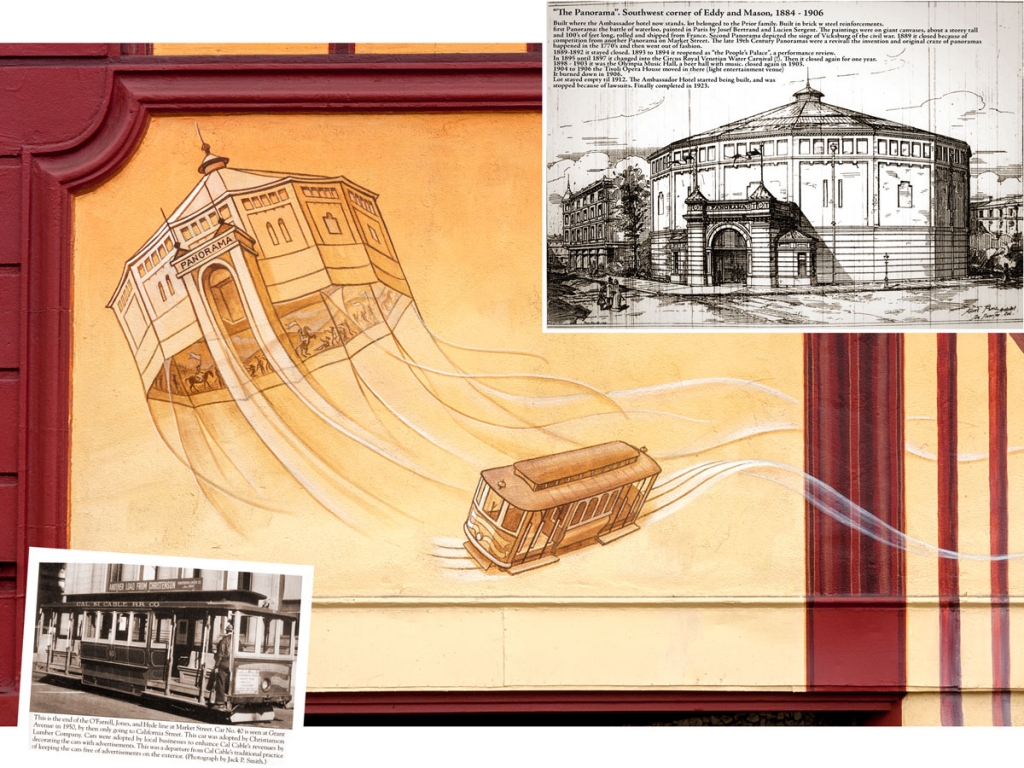 Near the corner of the mural floats the ghost of a "Panorama" building, a 19th century place of entertainment. Several such buildings used to exist in this neighborhood.

They were round or dodecagonal buildings, containing a 360-degree mural which people paid admission to see. This one stood at Eddie and Mason, and used to show the battle of Waterloo accompanied by music, and Edwardian-era "special noise effects" including lighting and thunder.

The "dinky" cable car number 51 used to run on Jones Street, right past this mural.

The upper right corner of the mural alludes to the history of the Southeast Asian community of the Tenderloin, and to Little Saigon.

A tapestry swings toward the cityscape, and contains a right-to-left series of vignettes describing what some of the early immigrants from Vietnam, Laos and Cambodia went through before they landed in crowded Tenderloin apartments.

The dragon is a positive symbol which was suggested to be included in the mural by the Southeast Asian Community Center. 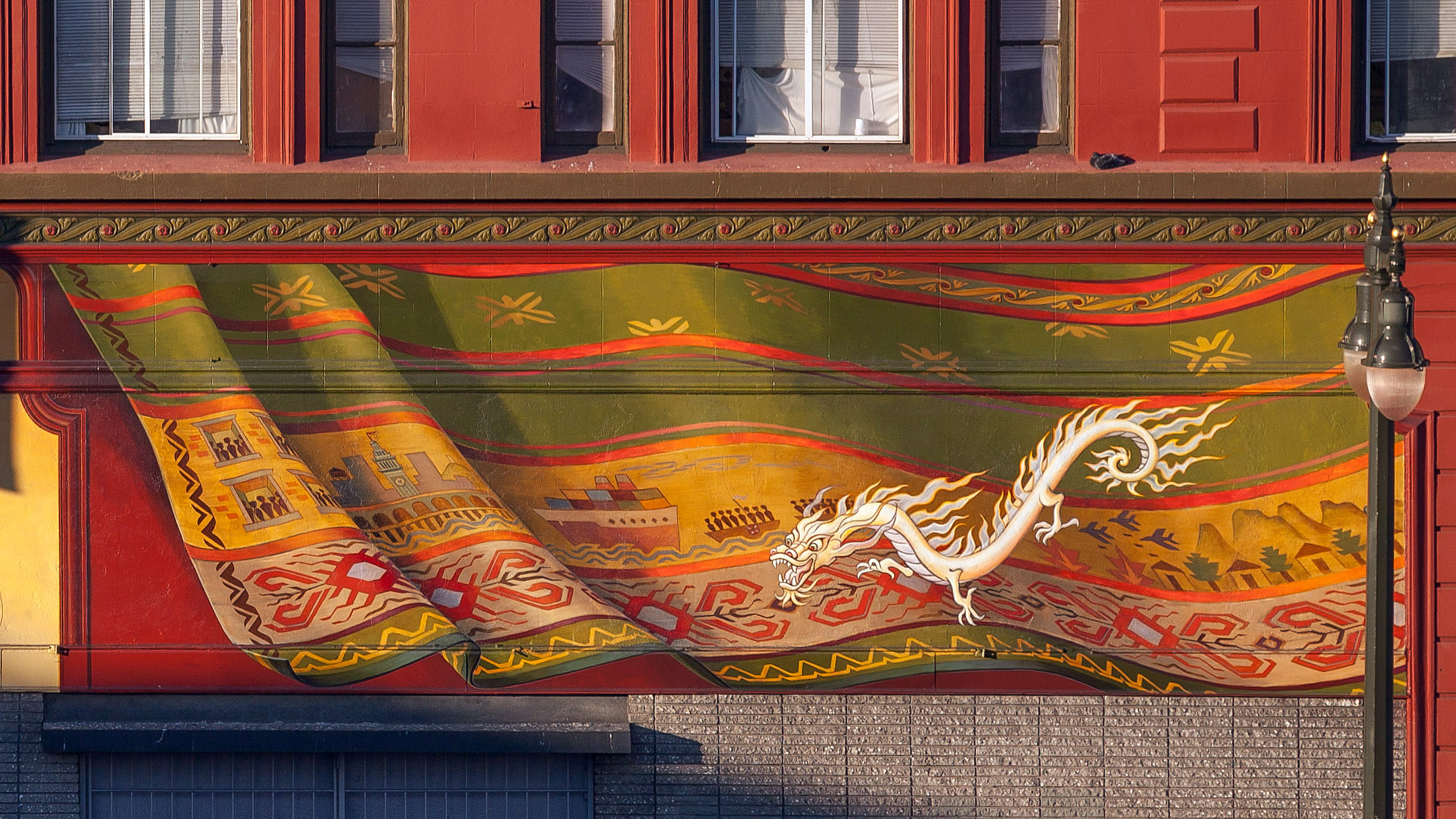