Windows Into the Tenderloin - Another Way

From the present to the future: a DIY utopia! This is the part of this mural that became a vehicle for the community to envision an alternative future, another way for their community to exist.

Both tall "windows" on Jones Street show the area near the mural: the intersection of Jones and Golden Gate seen from the Northwest looking towards Market Street. Both show the same exact setting, but one is about reality, and the other is about what could be.

Look carefully to the right of the mural, and you'll recognize the landmarks within the two tall mural "windows"... Click to enlarge.;

The twilight scene on the right was painted first, and it shows this street corner the way it was when the mural was being painted.

The second tall window, the verdant daytime scene to its left, was the last panel to be painted, and it shows the exact same place but... "Another way"!

The window showing "Another Way" is again populated with the neighborhood's people, some of them doing a specific activity they'd wished for, others simply sharing space in a convivial way with people of different local communities and identities. In this panel, I purposely scrambled the social geography of the area, and I painted people mingling with others who might not be within their circle.

The inclusion of local people in the future-fantasy panel was particularly crucial to the concept of this mural, because I strived to conjure up a vision for a more uplifting,  convivial and beautiful environment in this neighborhood without a change in population, which is improvement without gentrification.

For the same reason, I tried to let this utopian painting "grow from below" - through a loose and casual participatory process, and through relationships with individual neighbors that were formed through the sheer length of time spent on this mural, witnessing and engaging with the street.

By the time I got to the utopian scene, I'd been on that sidewalk for many many months, and having gotten to know the community better helped in generating ideas for "Another way".

By then, I'd found out about many people's talents, or their hopes and aspirations, or learned about the work they do besides their job that they derive more meaning from... So I tried to incorporate all these truer expressions of people's humanity into the utopian painting, along with their portraits.

Below are some examples:

Lisa Demb creates drawings of what she calls "the land of milk and honey". They are on display within this mural's own utopian vision.

Dennis McFarland, local street poet, represented in the future with a rapt audience.

Geraldine, a resident at the Lyric SRO hotel, won a prize performing a song dedicated to her deceased sister at a local community center. She performed again at the mural's unveiling party. (right) 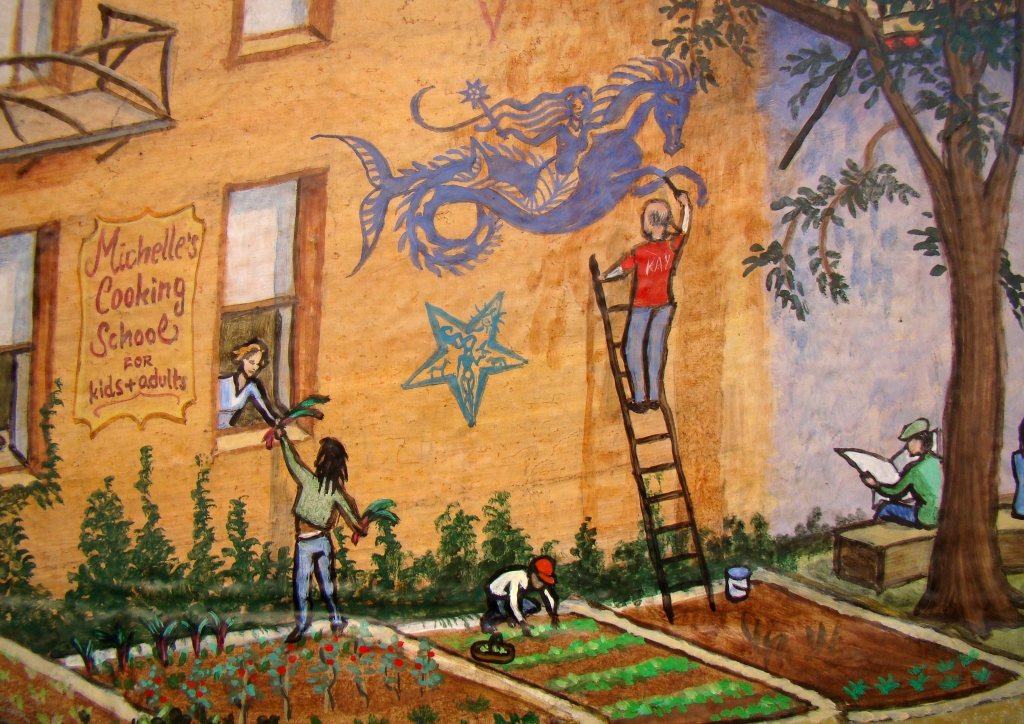 Michelle loves to cook, and loves the community. I painted her combining those things in the painting. Kay Weber is an artist who teaches art at the Boys and Girls Club across from the mural. On the right he is painting one of his pieces. 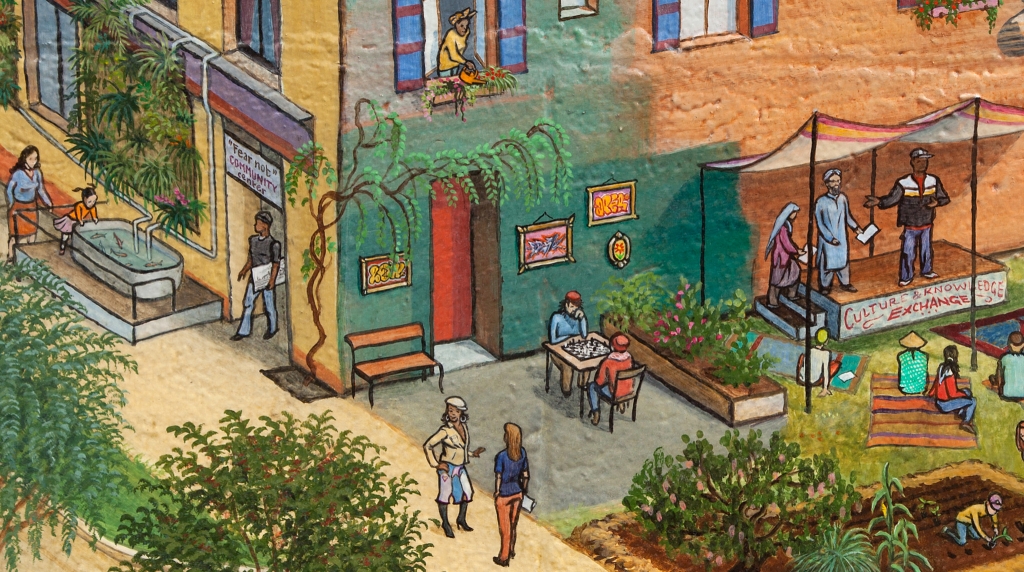 I collected tags by local graffiti artists, who wrote in my sketchbook. In the painting they are displayed within gilded frames on the wall, symbolizing greater appreciation.

The process of inventing the future vision relied, once more, on spontaneous interaction with people in the street. As people watched me trace the first lines of the same exact cityscape I'd just finished painting next to it, many asked why I was about to paint the same thing twice. I'd respond that, this time, we would redo the neighborhood whichever way we wanted. After all, a painting is not bound to reality! I then asked people for suggestions: what would *they* like to see here, if it were up to them?

The artwork of this mural consisted mainly of this sort of invisible theater aimed at activating the kinds of conversations that ensued, the painting itself being merely a byproduct of this experience.

Slowly, an alternative vision of the neighborhood emerged. I built upon my own ongoing series of "utopian" visions of San Francisco while integrating the ideas that emerged from these conversations with passers by, which ranged widely from the pragmatic to the fun and silly...

For the changes to buildings and larger infrastructure, I tried to pick ideas that could conceivably be implemented and maintained by people themselves, without massive top-down intervention. I also prioritized re-purposing things that are already there.

Some details are whimsical, and try to make up for my limited knowledge in engineering by using humor, but they are there to hint at an acknowledged problem to be solved somehow. I did, however, try to make functional objects look like they were built lovingly, especially things that provide shared resources. 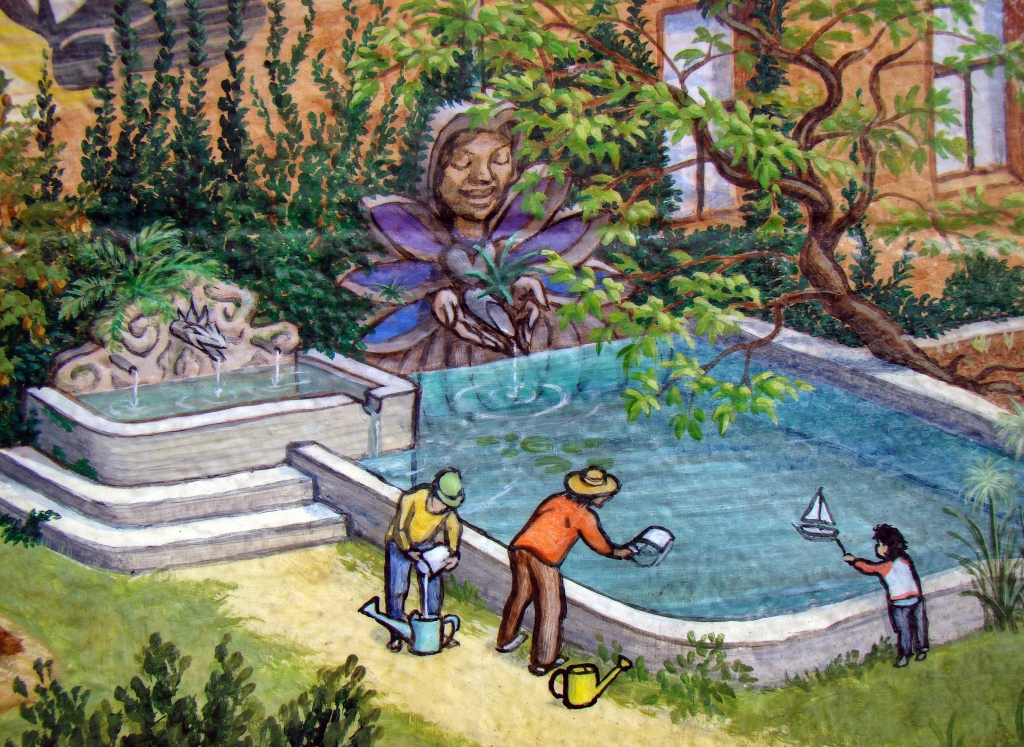