My first Weeds were a series of small graffiti, painted inch by inch and photographed at each stage, over hours and days, to create the stop-motion animations seen in my Weeds video.

At each location, I chose a wild plant growing nearby. Some invasives, some benign wildflowers, they had in common the simple fact that they were growing clandestinely, autonomously, in unlikely urban places.

I call them all “weeds” to reclaim this pejorative term, owning it, to focus not on these plant's intrinsic value to humans, but on their action of transgressive transformation from below. That is why I created my first weeds as stop-motion animations, to let the paintings act like weeds.

The location of the weeds in the video was often chosen for its resonance with this series' metaphor: places where alternatives are growing, where people are making a difference from the bottom up, resisting the entropy of our world.

Glimpses of some of my art for street actions also appear in the video: for example, this dandelion at the first People’s Climate March in New York in 2014, or footage or real weeds taken during the CIW farmworker’s march for rights and fair food in Florida, or others near Syntagma square in Athens during the uprisings in Greece, etc.

Below, more about these early weeds' symbolic locations.

My first weeds were painted within a block from each other, on various rooftops in San Francisco's Tenderloin district, a struggling area of the City where the resilience of the residents stands out in the face of tremendous economic and social adversity. 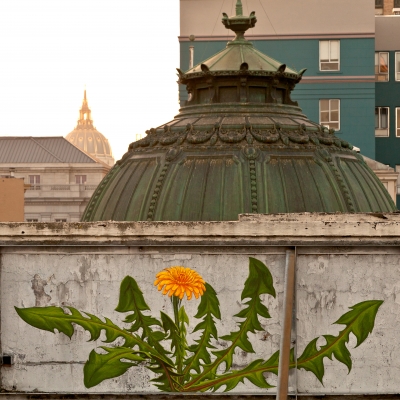 During the year and a half in which I worked on and around my Tenderloin mural on Jones Street, there were several weeds I kept an eye on.

There was one tenacious dandelion that kept growing at the foot of my mural, despite an obsessed neighbor who kept kicking it until it shredded, every time it grew back. How odd, the way we choose the things that bother us...

So I thought I'd base a new body of work on that patient dandelion I witnessed re-growing over and over, because I recognized in it the force and perseverance of many similarly treated people I'd gotten to know there.

Among the many acquaintances I made during my time in the Tenderloin, were the good folks at the Darussalam mosque, down the street. They kindly let me spend 3 days on their roof, making the dandelion animation.

Sow thistle and swine cress: I chose these next two plants in part for their pathetically ugly names.

They were painted on the rooftops of two adjacent buildings that had been my main view while working on that year-long mural on Jones Street nearby, and both buildings are represented in it. I wanted this connection of my nascent WEEDS to that mural, because despite being completely different types of artwork, deep down they stem from the same intention and message. 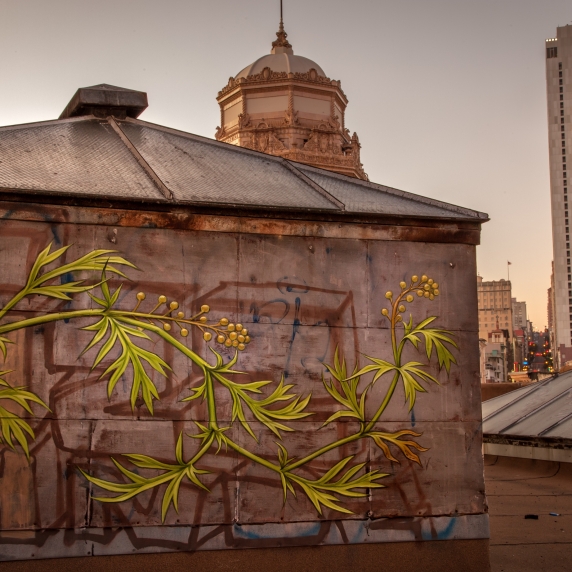 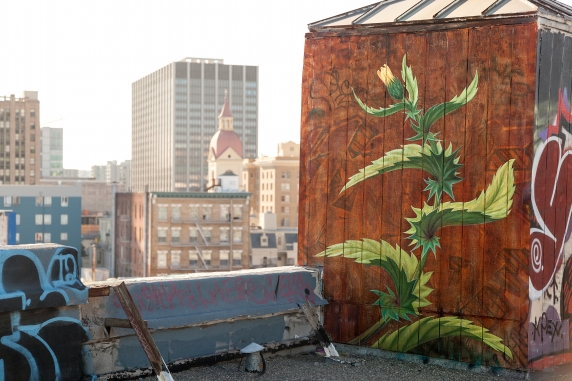 spiny sow thistle on the "Furniture and Carpets" bldg 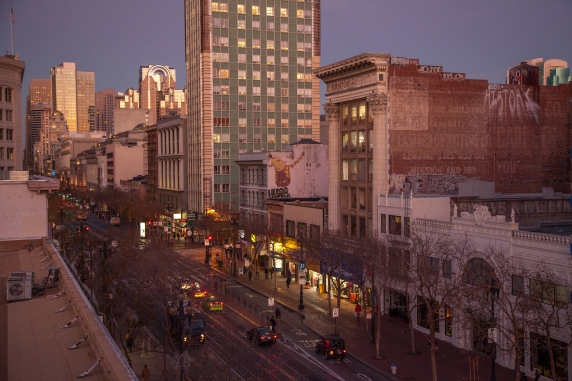 The buildings they are painted on. 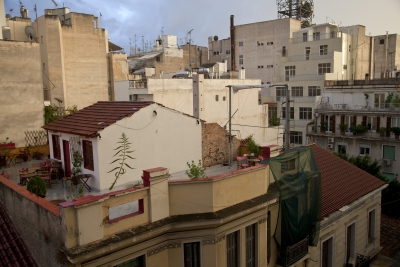 This quick weed animation grew in one of the more metaphorically perfect locations for my WEEDS project: on the roof of the autonomous social center Nosotros, in the rebellious Exarchia neighborhood in Athens, Greece.

I found the weed walking through Syntagma square in 2012 while on the "Occupy Everywhere tour" as visual band member with Rupa & the April Fishes, who also made the music featured in my weeds video.

Band leader Rupa and our greek comrade Tasos helped click the frames for the animation, from a balcony across the street.

That night, I painted another weed live inside the building during the concert inside Nosotros. Catch a glimpse of this animated weed also in this music video. 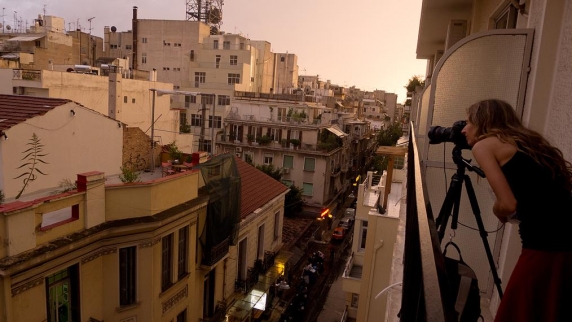 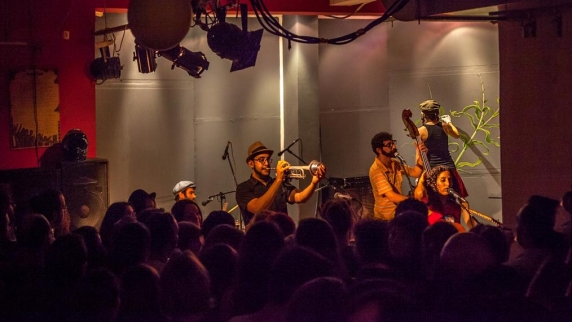 Stinging nettle at Can Mas Deu 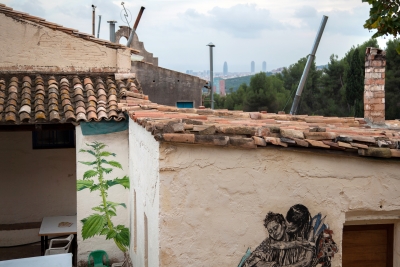 This stinging nettle sprouted by the entrance of Can Masdeu, a vast and successful nowtopian experiment in the form of an anarchist squat, inside a 16th Century leper hospital perched on a hill in the midst of Barcelona, Spain. 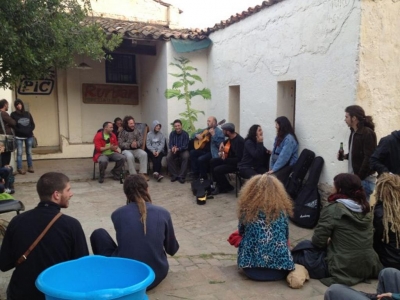 Like the stinging nettle, this community germinated without sanction or permission, and like the plant, it provides free healing and nourishment: it does so through a full and radical implementation of sustainable practices, through its vast community gardens, and through their convivial social and cultural activities, open to the surrounding communities.

And like a stinging nettle, the community here has proven to be prepared to defend itself against uprooting, if necessary.

While painting, I was kept hydrated with delicious stinging nettle tea. 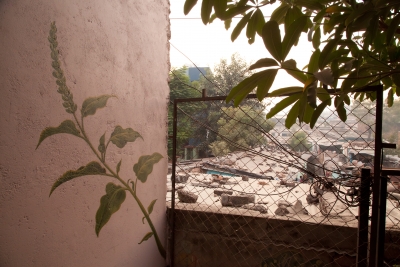 While on tour with the April Fishes, we ended up in Ahmedabad, India, where our friend Robin Sukhadia introduced us to a community center, in the midst of what we were told was the largest slum in Gujarat, not far from Gandhi's ashram. 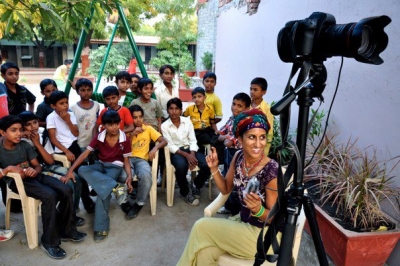 The place itself was an illustration of perseverance and uplift, a burst of beauty breaking through the harshest conditions. I drew this little weed just before sundown, based on one I found nearby, as an emblem of that resilience.
Rupa helped clicking the photos for the animation, while local children gathered to watch. Later the band performed there, and the kids danced so wildly, that they kicked up a literal dust storm.